The More, "Heroes Reborn," Comics Marvel Announces, The Less Excited I Am 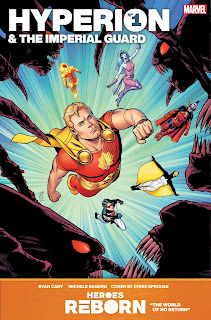 Last month Marvel announced a mini-event titled, "Heroes Reborn." It imagines a world where the Avengers never formed along with other heroes starting-up and instead the Squadron Supreme is running the show along with other interesting new versions of familiar characters. I thought it was basically an arc of, "Avengers," or a standalone mini-series. I was wrong as Marvel keeps announcing various one-shots and tie-ins As this, "Mini," event becomes more of a big full-fledged, "Event," I just find myself losing interest in buying any of it. 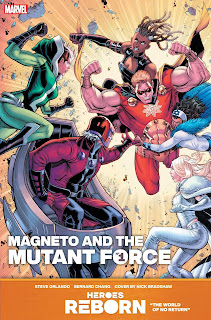 Massive events sometimes are cool but can be a waste of money too. I've been following a number of comics that tie-in with, "King in Black," because I have soft spot for Venom/symbiote stories and it's been alright, but I'm glad I am being a little picky in which books I spent money on with that mega-event. I do like a good alternate-Universe tale, with Flashpoint being an event I didn't know I would absolutely love as much as I did back in 2011 or so, and when Jonathan Hickman did, "Secret Wars," and its numerous tie-ins, that was pretty cool. I also plan to read a chunk of DC's current, "Future State," when some issues I ordered thanks to a good discount arrive. 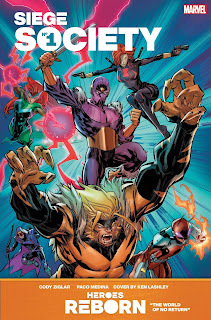 Still, I saved money on both those events by getting the countless tie-in comics from dollar bins or reading trade paperback collections from the library. I wasn't in a rush to read these massive events that tweaked the World in cool ways but had way too many tie-in books. Other, recent events, I have basically avoided and just read the tie-in comics that I was already reading. I didn't follow, "Empyre," at all besides in the X-Men comics I was getting that touched-upon that event--to give one example. 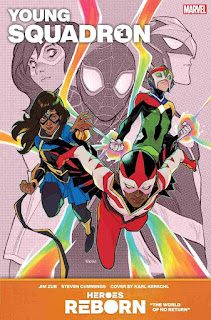 "Heroes Reborn," could be a lot of fun, but I don't want to spend a bunch of money on it. I'll probably wait for the trade paperback/paperbacks collecting it to arrive at the library eventually. I'm in no rush to read the event and its increasing number of tie-ins, so I'll give it time. Saves me a chunk of change, after all.

Posted by David Charles Bitterbaum at 10:37 AM