Milestone Returns as a Digital-First Imprint 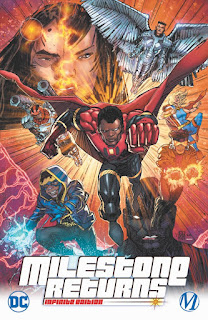 It kept seeming like the announcement was coming any day, then during DC's Fandome it was finally revealed that the Milestone line of comics would be returning! Created in the 1990s as its own publishing company with a focus on cool and diverse characters, DC acquired the rights later on and it kinda floundered after that besides some attempts to use characters like Static Shock in the regular DC Universe. After a number of years in a legal negotiation limbo, however, Milestone is coming back with some cool digital-first series that will have physical comics following-up starting in May. I'm pleased to see Milestone returning, although it is a little saddening that one of the original founders, Michael Davis, is basically being excluded. I look forward to seeing the new Milestone comics for sure, though!