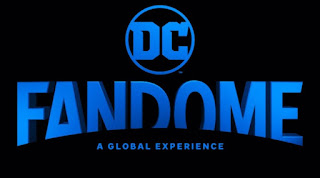 DC did their Fandome yesterday, a digital event full of announcements and movie trailers. Considering DC has been kind of rocky lately, it is good that it went so well. A lot was announced or confirmed, from the return of Milestone to a new, "Wonder Woman 1984," trailer, and the first footage of, "The Batman," which looks promising and very grim. It has a great cast with Robert Pattinson and Jeffery Wright among others and Director Matt Reeves looks to be making something snazzy. The, "Flash," movie was talked about a bit too, basically confirming the Multiverse of films idea--hence multiple Batmen.

Some video-games were confirmed too, with Rocksteady making that hinted-out, "Suicide Squad Kills the Justice League," video-game where they fight a Brainiac-controlled assortment of heroes. That isn't due out till 2022, however, so get ready for a wait. Another Batman game was announced too, "Gotham Knights," but without Batman as he apparently is dead for this game. That game is being spearheaded by WB Montreal and has all of Batman's allies teaming-up to fight the Court of Owls. That's due next year, so less of a wait.
For those who have eagerly awaited news, Zack Snyder shared some footage of his director's cut of, "Justice League," and it looked like a Snyder film without a doubt for better or worse. In news that interested me a bit more, John Ridley will be writing a Batman comic that isn't part of DC's now-scrapped 5G plan, but still features some rumored elements such as someone else taking up the mantle of Batman who happens to be Black. Ridley is a great director and comic-writer, so it'll be fun.

DC's Fandome was split into two days, so there will be more stuff in September. For now, though, this was a pretty neat way for DC to show-off stuff to everyone stuck at home in a safe and enjoyable manner. It was like a Zoom call that was actually entertaining, which as we all know is a rare thing.
Posted by David Charles Bitterbaum at 10:46 AM