Boss Fight Books' Examination of, "Majora's Mask," is a Treat to Read 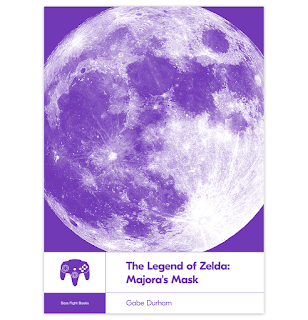 Boss Fight Books publishes little books with writing by authors examining various video-games of note. I've enjoyed reading their books that delve into games I remember. One game I recall quite fondly is, "The Legend of Zelda: Majora's Mask," which is now 20 years old. I saw Boss Fight Books would be doing a book on, "Majora's Mask," and eagerly backed their Kickstarter campaign to fund that book along with some others. This particular edition is written by Gabe Durham, who uses the pages to explore the unique development this game faced--it was quickly made within a year using a lot of assets from the previous game, "Ocarina of Time," as well as the impact the game had on us all, with countless fan theories now existing arguing about what the game, "Really means."

"Majora's Mask," is a weird little Zelda game. It throws link into an alternate dimension called, "Termina," and has him repeating the same three days over and over due to the fact a very angry moon crashes into the land at the end of that cycle, destroying everything. As you repeat these days you help all the residents of the town while also exploring some dungeons. It has classic Zelda elements (those dungeons), but also carries a weird melancholy vibe as everyone in Termina deals with the fact that a moon is quite clearly going to obliterate everything. Oh, and the element of how masks transform Link into other forms was awesome too, to somewhat bury the lede of how incredible the many in-game masks were that morphed link or simply resulted in changing people's perceptions of him.
Durham examines a number of old interviews and articles while doing some interviewing of his own, digging into how this unique, "Zelda," game really stuck with people and made their imaginations run wild with theories about the surreal World of Termina. It's a fun read and I was ecstatic to get the book a bit earlier than its official release date in October thanks to backing the Kickstarter campaign. I'd highly recommend preordering the book here so you too can enjoy reading about what I argue is one of the best, "Zelda," games ever thanks to being so unique and wild.
5 out of 5 stars.
Posted by David Charles Bitterbaum at 11:55 AM