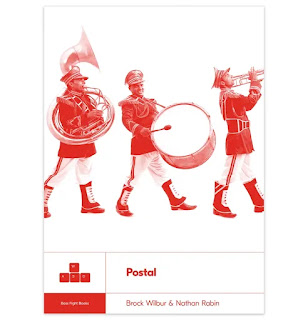 Boss Fight Books is a publisher who specializes in releasing little books that examine a particular game or series. They've done books on everything from, "Bible Adventures," to, "Meal Gear Solid," and plenty of other titles. Different authors work on each book, and it tends to be quite talented folk. The latest release is, "Postal," which examines one of the more infamous game series. A series I'm a little embarrassed to admit I played a good deal of.

"Postal," is one of those game series that wants to be offensive. The first game was a 3rd person isometric title where you blow-up everything and everyone for little reason. I only ever played the demo and found it decent at the time. "Postal 2," is an open-world title that thinks it is a bit like, "South Park," in how it tries to offend everyone whilst being self-aware and winking. It at times is fun and clever, but mostly comes off as crass and stupid. Teenager David loved it, thinking it was, "Edgy," and, "Not afraid to go there." Teenager David played hours of, "Postal 2," and believed it was genius how everyone was a target for jokes. 31-year-old David realizes that just being offensive for the sake of offense is a pointlessly silly endeavor.

The David of today loves gross-out humor, raunchy comedy, yes, but likes his satire and parody to have a point--you know, actually be satire or parody. The, "Postal," series wants you to find it funny because it's being outlandish, but it rarely has a point beyond, "I'm so edgy, I'm so shocking, laugh at how over-the-top I am!" This isn't to say there aren't some funny moments in, "Postal 2," which is the title I played the most, but it overall is kind of a bland game where you run around a poorly-rendered town doing fetch-quests thinly disguised as errands (buy milk, pay parking tickets, and so forth) while people start shooting at you should you step out of line in any way, and you then shoot back in-between tone-deaf jokes. Rinse, wash, repeat.

Authors Brock Wilbur and Nathan Rabin tackle different parts of, "Postal," with Wilbur talking primarily about the game series and Rabin discussing the movie adaptation that was directed by Uwe Boll--yes, the Uwe Boll. Wilbur discusses a lot of how the games work/don't work, but also is fortunate (depending on how you look at it) in that he is able to interview Vince Desi (the head of the company that developed the, "Postal," games, with the vaguely humorous name, "Running With Scissors,") and Mike J (a VP at the company). Desi is coarse, harsh, and mostly unpleasant, but just funny enough he's almost endearing in a miserable way. Mike J is more soft-spoken and careful in his wording, but clearly a bit of an asshole too, which he readily admits. Desi, Mike J, and the rest of their company know their games aren't the best and lack much quality, but they're proud to be offensive and otherwise, "Go there," for the sake of being able to say they made a tasteless joke, consequences be damned.

This is all while ignoring the fact there aren't consequences, nobody cares about their juvenile humor and overly-gross games anymore beyond some members of the media or politicians who vaguely recall these games stirring up controversy decades ago and want a target to blame for mass-shootings besides the actual problem of America having a horrific issue with regulating guns as well as keeping people from them who should have no access to such weaponry. Wilbur's half of the book is both fascinating and a bit funny while also being soul-crushingly depressing. That makes it pleasant that Rabin's half where he discusses the bonkers, "Postal," movie and actually interviews Uwe Boll is more surreal and funny than sad.

Uwe Boll is a movie director who is considered by many to be the worst director of all time. He found a loophole in the German tax code that allowed him to make movies for basically no cost as he could write-off the whole endeavor if his flicks flopped. He wanted to make genre films and noticed that genre films based on video-games did better than ones that were original. With all of this in his mind, he made terrible film adaptations of many video-games. His films were ravaged by critics and he raged against them for not understanding his art. The more Boll cursed and yelled at his critics the more he self-sabotaged himself from getting respect. He eventually quit making movies, and by the time Rabin interviews him he's still mad, but he's also tired. The Boll of 2019 or so is an exhausted and worn-out man. A man who defends his work still, but is also at a point where he's sadly accepted that people just don't like his stuff. This makes it all the more ironic that the, "Postal," movie is probably one of the better flicks he did.

"Postal," as a movie was a lot like the games in that it wants to be horrifically offensive. It was loaded with 9/11 jokes when that was still a very fresh wound, insults basically everyone it can, and sometimes actually manages to be just a little bit clever and almost heartfelt, before making fun of itself for hinting at anything resembling an earnest emotion (and then goes back to making tasteless jokes at the expense of basically any demographic you can think of). From what I've seen of it (I've watched a number of clips, but don't really want to sit through the whole thing), the movie ain't good, but it is competent enough that if you squint really hard you can almost see some good jokes and quality bits among the stupidity and trash--kind of like the games. Boll still defends, "Postal," as being one of his best works, and I guess that's true. However, "The best film by Uwe Boll," is still a really low bar to clear.

I've now spent quite a good deal of time talking about the book, "Postal," as well as my own thoughts on the series, "Postal," itself. I found reading the book a bit therapeutic as it allowed me to reconcile my current-day self that sees how empty the games were at their attempts to shock or antagonize with my teenager self who was unable to realize how, "Gross and offensive," did not necessarily equal, "Clever." We all did dumb stuff as teens we regret. For me it wasn't anything as dramatic as taking illicit drugs or getting arrested, it was adoring a game series that I now can see was quite stupid. Running With Scissors continues to make, "Postal," games with a 4th one in production, as the book discusses. It looks like it has the same humor of all the previous titles. It seems I grew up, but, "Postal," did not.
5 out of 5 stars.
Posted by David Charles Bitterbaum at 3:44 PM