Kanye West is a Billionaire Now. Good for Him 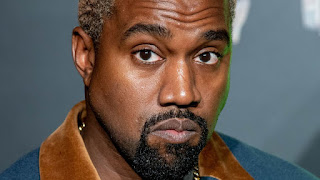 As longtime readers of this blog know I was once an outspoken supporter of Kanye West and about as anti-Taylor Swift as someone could possibly be. Then in 2018, I wrote a heartfelt piece about just how badly Kanye West let us all down in oh so many ways. Next thing I knew I was backing Taylor Swift and now quite enjoy her new music, while finding it painful to even listen to Kanye's older albums knowing how he is now. I spend my days in 2020 basically thinking about Kanye as little as possible and not minding hearing Taylor on the radio. Sometimes Kanye makes himself too apparent to ignore, however, proudly announcing he was now a billionaire thanks primarily to his fashion line. All I have to say about this is, "Good for him."

The Kanye of today is unrecognizable compared to how he once was (something he even has acknowledged in his songs). Kanye was a lovable underdog, someone nobody believed in. He had so much determination, drive, and belief in himself however he managed to get, "The College Dropout," made and it was incredible. He then gave us more and more hits, getting cockier but backing it up. Then something happened. I'm not sure what, but he became a Trump backer, started saying insane things about slavery being a choice, was hanging-out with Megachurch preachers, writing-off any music he considered secular, and focusing more on getting a bunch of money from his sneaker and clothing empire than making music or even more importantly--making a difference.

What happened to the rebel who told it like it was during Hurricane Katrina? What happened to the angry and righteous young man whose first song on, "The College Dropout," is the scorchingly outspoken tune, "We Don't Care," or created a lush sonic wonderland with, "My Beautiful Dark Twisted Fantasy," and so many more albums & tracks? I don't know if, "The College Dropout," Kanye would've been so obsessed with being rich that he would angrily declare how Forbes undervalued his fortune. He would have just wanted respect for his talent and to know he was making a difference. Kanye is rich now and surrounded by other powerful and wealthy folks (The Kardashians and Jenners). I hope he's happy because unless he at some point offers an explanation for everything that has happened these last few years I think this post is the last time I intend to write about him. It just makes me too sad to think about the Kanye we once had and the Kanye we have now.
Posted by David Charles Bitterbaum at 10:19 PM