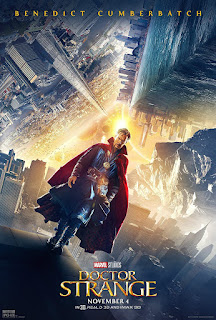 I put off seeing, "Doctor Strange," for quite a while after it came out. I did this because I heard how it was a shoddy film. People said it was just a retread of, "Iron Man," with magic, it was dull, Benedict Cumberbatch was mediocre, and all these terrible things. I finally saw it in 2019, about three years after its initial 2016 release, and...loved it. This wasn't a fluke, it has held-up to rewatchings and I have to say, "Doctor Strange," is a damn good film.

It is a bit like, "Iron Man," in the idea of a jerk learning responsibility is a key plot point, but that's like saying, "Star Wars," is the same type of movie as, "Lord of the Rings," because they both feature a big quest (taking down the Death Star/returning a magic ring to a Mordor). Plus, Benedict Cumberbatch does a stellar job, coming across a good mix of cocky at first as a highly-skilled surgeon, then desperate after he needs help to repair his hands due to a nasty car accident, followed-by thoughtful once he begins mastering his powers. Oh, and the special effects are incredible, with people fighting in warped cityscapes, jumping through portals, and the scene where time starts to rewind towards the end is fantastic as well. Plus, "Doctor Strange," avoids one of the biggest problems found in Marvel movies, a boring climax. 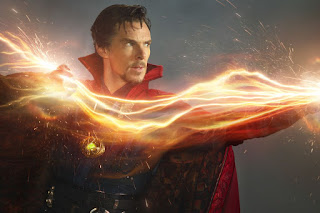 Often in Marvel flicks everything builds-up to a big fight with the main villain which ends up being an over-the-top display of special effects that goes on way too long. That ain't the case in this movie. Instead, Doctor Strange uses his smarts to trap the big baddie (the demonic Dormammu) in a time-loop until he agrees to give up so that he and Strange aren't caught infinitely in a stalemate. Instead of some crazy long-winded fight, the hero wins with their smarts in Marvel movie, how cool is that?

"Doctor Strange," is by no means perfect. Rachel McAdams is a stellar actress who is given little to do as Strange's on-again, off-again girlfriend, and the last-second reveal of another Infinity Stone comes across as a bit of, "Oh yeah, we have to tie this in with the Avengers,"-moment. That said, "Doctor Strange," is easily one of my top Marvel Cinematic Universe movies, and seeing how much disdain it receives online honestly befuddles me. I guess I'm just different in thinking this and, "Iron Man 2," are a lot better than many claim.
Posted by David Charles Bitterbaum at 11:41 AM