A Writer at Business Insider Called the New Animal Crossing Game, "Dumb, Boring," and, "For Children." 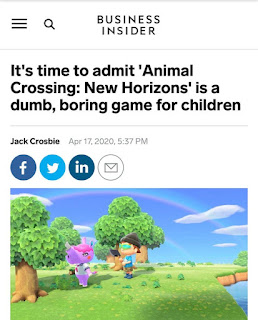 Jack Crosbie at Business Insider absolutely ripped into, "Animal Crossing: New Horizons," and while I love the game, he makes some decent points in his takedown about improvements that could be made. The interface can be a little annoying, with things that should be easy taking a lot of menu-clicking (just let me use the craft table to make stuff in a batch instead of one-by-one, please), but saying it is, "A stupid baby game," is just harsh. Plus, games for kids can be good, just because a title is geared towards children that in no way means it has to lack quality. That's why I think the, "Animal Crossing," games are so beloved, they appeal to youth and adults. They're fun, quirky, and while they have some faults, they are lovely little ways to relax.

I respect Crosbie has his own opinion, but places such as Reddit and GameFAQS lit-up with enraged fans. Clearly, his tastes in games just differ from some folks, and that's okay! That said, Business Insider clearly wanted some press with this opinion piece featuring a lot of over-the-top wording, and attention they got.
Posted by David Charles Bitterbaum at 11:56 AM