I Watched, "Venom," and It Was Decent 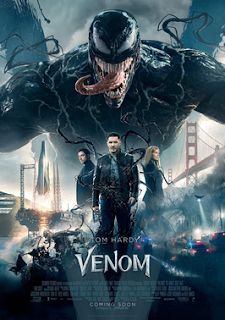 I watched, "Venom," because I like Tom Hardy and I checked it out from the library before everything shut-down due to the quarantine. Without Tom Hardy I might find it bit a lacking, but thanks to his presence I found the flick enjoyable. Hardy plays a reporter named Eddie Brock who ends-up fighting an evil rich guy obsessed with technology (kind of like an Elon Musk who doesn't mind murdering people) by bonding with a space alien named Venom. It's dumb fun and it has Woody Harrelson in a huge red wig in the mid-credits scene to set-up a future movie with Venom's foe/offspring, Carnage. Plus, Tom Hardy jumps in a vat of live lobsters and eats one after bonding with the alien because he's always hungry, that was funny.

Frankly, I'm just amazed a, "Venom," movie works without the character interacting with Spider-Man as in the comics Spidey basically defines a lot of who Venom is as a character. Also, besides the Venom symbiote resulting in over-the-top effects, "Venom," itself doesn't really feel like a super-hero movie. It is more of a thriller-comedy with a weird alien thrown-in. Plus, the movie honestly does take a little too long to get to the actual, "Venom bonding with Eddie," part about 1/3 of the way into the movie. All-in-all it was not a bad way to spend about 2 hours.
3 out of 5 stars.
Posted by David Charles Bitterbaum at 10:29 AM