Taylor Swift is Acting Like What She Once Railed Against: Being a Bully 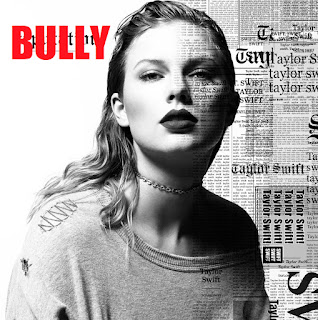 America, we need to talk about Taylor Swift. She used to be an adorable, "Aw shucks," country singer who we were so impressed with for being a young teenager who could string together some guitar chords while bemoaning all the men she hated, but as time has gone on the shtick has gotten old and her love of choosing to play the poor picked-upon innocent has resulted in her acting like the kind of people she claims she hates--bullies. This playing-up of constant victimhood has turned into a big act and her latest song, "Look What you Made Me Do," doesn't just sound like lukewarm pop but also is arguably meant to be another, "Game," for fans to parse-out the secret meanings of which aggressors she is now admirably rebelling against because, "I'm the one being hurt here, you guys!"

The people she is calling-out but not actually naming? Kanye West and Kim Kardashian. I guess Taylor still hasn't got over how bad it burned when Kim leaked that video where Swift actually said she liked Kanye's lyrics joking about her despite previously claiming she was, "Like, so enraged you guys!" Seriously though the one useful thing Kim Kardashian has ever done for the public is releasing that tape where, Swift outright says, "I really appreciate it," to Kanye about his lyrics discussing her and proves herself to be a big liar. I haven't eve yet discussed how Swift is seemingly purposely releasing her new album on the 10th anniversary of the death of Kanye West's mother, Donda West (It will have been a decade since her passing on November 10th, 2017). Kanye has never been shy about expressing just how much his mother meant to him when she was alive and how her death impacted him. Swift basically sees this vulnerability and is choosing to exploit it, rubbing salt deep in Kanye's wound.
One could claim this is all some crazy coincidence but considering how, "Look What You Made Me Do," is basically a thinly-veiled tirade against West and Kardashian things ain't looking that innocent. It is ironic when someone likes to act like the one being victimized so much that they end-up turning into a big bully, terrorizing others with their threat to, "Cry wolf," about being picked upon. I guess I shouldn't be surprised. Swift set herself ups as this sweet little white girl who was picked-on by the big mean black man and has been milking that outrage ever since. Yes, Kanye was a dick that night at the VMAs back in 2009 when her interrupted Swift's speech, but her harping on that and the faux-anger she tried to foster when he rapped about her has turned into Swift just being vindictive and the chosen album release-date just feels like kicking West on a day he's sure to be feeling down. Swift is acting like the bullies she claims to despise. The next time Swift wants to call-out a bully maybe she should just look in the mirror. You can buy her new single on Amazon as a digital track if you want, but I wouldn't.
Posted by David Charles Bitterbaum at 11:04 PM