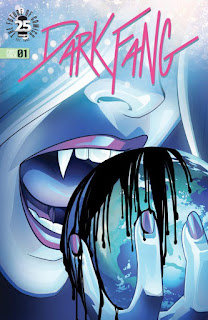 I generally try not to just copy and post P.R. releases from various publishers as posts, because plenty
of other websites I enjoy reading do that and if you're coming to my site you usually are well-versed in comic news or don't care about it and read my page instead because you want to read my scattered thoughts on the rest of the wild world of popular-culture. That said, a newly-announced comic from Image caught my attention enough that I wanted to share with everyone else how it sounds neat. The book is, "Dark Fang."

Written by Miles Gunter and illustrated by Kelsey Shannon, "Dark Fang," is an action-horror book about a woman named Valla who is a vampire and has lived peacefully at the bottom of the ocean, presumably subsisting on the creatures down there. Suddenly her whole home finds itself dying and she ascends where, "Searching for answers on the surface, Valla finds a world headed toward an environmental collapse that will ultimately wipe out her food supply. Now, to stay fed, she must take on the juggernaut that is the global fossil fuel industry." Yes, this is a comic about an environmental activist vampire. How weirdly awesome does that sound?

I know it won't appeal to everyone, but I personally would get a kick watching Valla lecture an oil baron about how what he does is hurting our planet and when he tells her to buzz-off she takes a big chomp out of him, it would be weird, funny, and cathartic considering just how doomed our planet currently looks in terms of how those in power are handling the environment. There isn't currently any preview art available and the book isn't due to be released until November, but I know I'm already excited to see what this story holds!
Posted by David Charles Bitterbaum at 2:04 PM