Horrifyingly Fun AKA "The Howling: Revenge of the Werewolf Queen," #1 and #2 Review 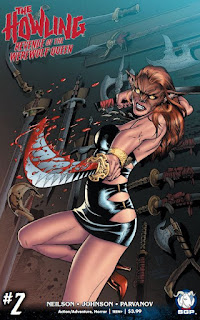 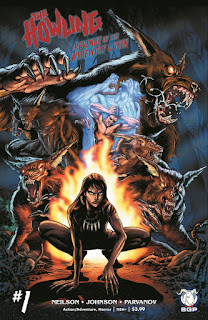 This series is based upon the first, "The Howling," movie (directed by the talented Joe Dante) from 1981 and serves as a sequel of sorts that directly follows-up the first movie in a way a lot better than the film-sequel. I think I saw the first, "The Howling," movie but enough background information is provided in the first issue as a recap that folk coming in cold should be fine. For those wondering why I say how I can't recall for sure if I saw the first, "The Howling," back High School I would rent a ton of movies from Hollywood Video and saw so many horror movies--both good and bad--that sometimes I struggle to recall what exactly I can or can't remember well. That said, reading the description of, "The Howling," sounded familiar to me and I also vaguely recall how other than the first movie and a quirky third film in the series, the rest is pretty much garbage and therefore this comic is well-served by only following-up on the plot of the first movie and disregarding later stuff. 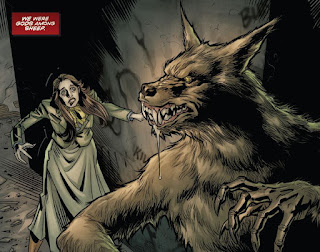 Written by Micky Neilson and illustrated by Jason Johnson this comic starts right after the conclusion of the first film when a reporter named Karen White tried to expose who werewolves were real to the world by turning into one on television...before being shot by co-worker Chris Halloran with a silver bullet (he regrets it but has his reasons). After being shot Karen's body reverted to normal and he'd be in big legal trouble if it weren't the fact other's witnessed what happened in the studio and on television (although most T.V. viewers have written the whole things off as a hoax). The weird thing is all the witnesses are disappearing or dying-off at an alarming rate. Oh, and meanwhile, a werewolf named Marsha Quist AKA "The Werewolf Queen," escaped when a werewolf colony she lived at was attacked by the aforementioned Karen and friends. She's now cutting a bloody swath through L.A. in pursuit of a mysterious artifact and it is clear her and Chris' paths will soon cross.

Many people will tell you (myself included) that horror comics can be hard to do well. With the proper writing and artwork they can be intense and suspenseful pieces of entertainment, but mess-up on element and the whole book falls apart. Thankfully Neilson and Johnson make a stellar team and provide us readers with solid plotting and suitably scary (plus gory) artwork. Thanks to a stellar creative team giving us an awesome sequel to a fun movie, Space Goat Publishing has one great series they are putting-out and I look forward to reading more! Now I just need to re-rent, "The Howling,' flick so I can refresh my memory a bit more about it! I enthusiastically rate these books each as 5 out of 5 stars. Should you want a copy of either issue that has come out you can buy them at Things From Another World or My Comic Shop.

Note: A digital copy of each comic was provided for the purpose of review upon my request to the publisher to receive review copies of books.
Posted by David Charles Bitterbaum at 8:30 PM