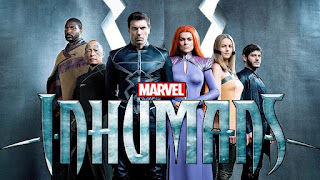 I know it is currently in vogue to hate-on the dreadful-looking, "Inhumans," television show being done by Marvel, what with how the director of the show admitted he was hired to make something, "Fast and Cheap," or that even panels to promote the show are train-wrecks. That said, it really does look awful. I didn't realize how little interest I had until today however.

Today I was looking through my emails and got a message from Marcus Wehrenberg Theatres, which used to just be Wehrenberg until they were bought-out by the Marcus chain. As I had Wehrenberg rewards it was easy to switch to the new reward system so that I can earn points when I go to the theater and buy snacks. I also get emails about various other fun ways to earn points, which leads to my telling you how I got a message which informed me I could earn ten points simply by watching a trailer for the show. Observe:
It was at this moment I realized I care so little about an, "Inhumans," television show I won't willingly watch a trailer for it even if it earns me a reward. To put this in perspective, I spent a chunk of a hour looking for the, "Avengers: Infinity War," trailer that was exclusively shown at D23 as well as CCI/SDCC and can be a pain to find a leak of. Meanwhile even if a theater-chain offers me  a smattering of points towards movie tickets and snacks if I just click on a link and let a trailer play on my phone--which I know I don't even have to pay much of any attention to while it runs--I just simply refuse to take part in even feigning interest.

I don't hold any anger or ill-will toward the, "Inhumans," television show which makes me want to go out of my way to insult it, I am just so incredibly indifferent it is hard to summon the energy to press my finger on an email-link to the trailer. When I can't even click a link related to this show knowing I'll get a reward if I do so, that my friends is a pretty bad omen for any future, "Inhumans," success. If anyone wants to make me a bet that this will last more than a single season I'll gladly take you up on it. If I'm wrong I'll buy the one good Inhumans story I ever read for you, and if I'm right you can buy me a reasonably-priced trade paperback of my choosing that I'll guarantee you will have nothing to do with the Inhumans.
Posted by David Charles Bitterbaum at 3:04 PM