Way back in...let me check my notes, 2015, I made a post evaluating the idea of Kickstarter and having it compete with or compliment retail. The main idea was looking at how appropriate or inappropriate it is to run a Kickstarter if you're also releasing your comic for retail--e.g. in comic stores. My overall conclusion was I was pretty much okay with bigger name creators making a comic, putting it on Kickstarter, and having special versions of that comic be exclusive to Kickstarter. I reasoned it was a way to test the waters for a comic idea so you could see if it was viable. It is now...let me check my notes again, 2020, the worst year so far in recent memory, and I still feel that way. A new Kickstarter by Scott Snyder and Tony Daniel has the opinions of others split, however.

Scott Snyder is a big name who has done some great comics for Image and some mega-books for DC. Tony Daniel is a longtime comic artist who appears on a number of notable books. They are established, successful guys and are teaming-up for, "Nocternal." It is a sci-fi comic about Earth being stuck in permanent darkness and how people react to that kind of situation. There is a deluxe edition that will be available solely through Kickstarter, but "Nocternal," is also going to have a conventional release from Image. Again, I'm okay with this, but some are not. There are folk out there saying big names like Snyder and Daniel don't really need Kickstarter--just mill around Twitter for some choice words. Then again, some would argue with how volatile comic-books have become, this is the new way to have some sense of stability in a very unstable business. 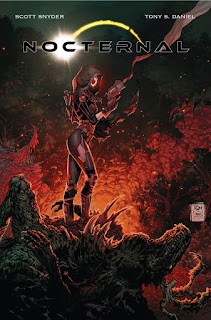 It stands to reason as the comic-book industry only gets rockier we will see even more, "Established," creators turning to methods like Kickstarter or a surge of self-publishing again. How the fanbase of these creators will respond to such a thing--with enthusiasm or trepidation/outright anger remains to be seen and will be a big factor in the success of these increasingly popular alternative methods of selling comics and making a living.
Posted by David Charles Bitterbaum at 9:49 AM