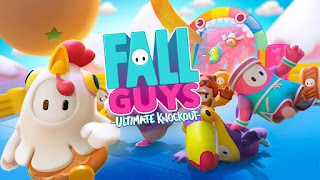 "Fall Guys: Ultimate Knockout," or as most people simply call it, "Fall Guys," is an absolute hoot of a game. It is bright, colorful, and competitive in a manner that is more joyous than stressful. Plus, my son loves watching it on the television (it makes him laugh a lot). "Fall Guys," is kind of like those battle royale games that have taken over in that you start with 60 players and it is whittled down to one winner. That's about where the comparisons end, however.

"Fall Guys," takes your wobbly and colorful avatars and puts them in various rounds (sometimes in small teams, sometimes as a free-for-all). Within these rounds, a certain number of players need to make it through a course to qualify for the next round, knock beachballs around, or avoid falling into slime before enough people have lost that you're golden. It is super fun. 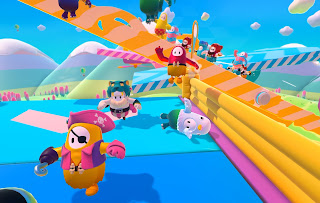 When I put on, "Fall Guys," it got Clarkson's attention with its peppy music, bright colors, and hilarious ways all the little fall guys trip over each other and obstacles as they race about. Seeing him giggle at the cartoonish graphics and funny action made Samii and I all warm and fuzzy for sure. Clearly, whether you're an adult or a young child it is easy to see how, "Fall Guys," is stellar.

I played,"Fall Guys," on my PlayStation 4 but you can also give it a whirl on STEAM. Now, it does have some dreaded in-game currency, but that is only for buying, "Kudos," to customize your character. You can also earn kudos in-game and they don't give you any sort of advantage when playing beyond looking snazzy. That slight gripe aside, "Fall Guys," is adorable, exciting, and worth trying out.
5 out of 5 stars.
Posted by David Charles Bitterbaum at 2:22 PM