In Good News, "Stubbs the Zombie," is Coming to Modern Consoles! 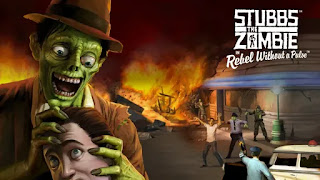 It was just September of 2020 when I looked-back at a classic game and wrote about how I wish it were on modern consoles in some form, any form. That game was, "Stubbs the Zombie." It was unique at the time in being a zombie game where you actually played the zombie. It also was hilarious, had a stellar soundtrack, and simply was a delight to play. Well, in news that made me smile, Stubbs is back! The 2005 game is going to be released with modern controls and achievements, but nothing else. No new graphics or features, just the classic game.

I don't mind this as you don't always have to mess with a good thing. We don't need a remaster of Stubbs, we just need some Stubbs in our life! The game will be on basically every console from the current Xboxes, to Playstations, the Switch, and also PC. I'm pleased and can't wait to replay it as it's been quite a while since I got to spend some time with Stubbs! It'll be out on March 16th, so mark your calendars.

Posted by David Charles Bitterbaum at 10:56 AM