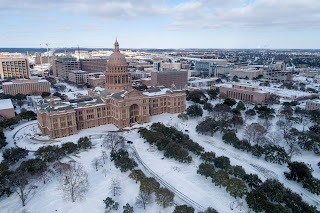 The World--and it seems America in particular--has gotten to a point where now people don't even believe snow is real and must be a government conspiracy. I'm not joking. The idea that maybe a bunch of snow could come down in a region that doesn't usually get snow for some reason upsets people. It must somehow be the fault of President Biden, or Bill Gates, or some kind of conspiracy to rain, "Chemical snow," down. Why do people believe this stupidity? Because it's 2021 and now even the fact that it snows sometimes is something conspiracy theorists have to question. I really think Deltron 3030 said it best when he rapped years ago--and I paraphrase--"Aliens came and said we weren't even worth invading," because we were too stupid to be of use if conquered.