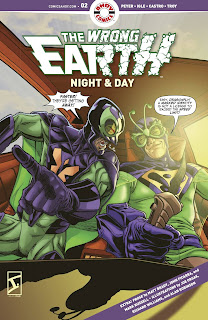 I've been a huge fan of any mini-series involving, "The Wrong Earth," and the latest mini-series, "The Wrong Earth: Night and Day," has been awesome. The series basically imagined if a grim and gritty hero traded place with a very campy one and went from there. They are Dragonfly and Dragonflyman and now they've finally met-up in yet another weird Universe. A Universe where their arch-villain is actually thought of as some kind of hero due to how he's cleaned-up that Universe's pollution...by sending it to the other realities. Tom Peyer has been writing the series and I continue to love it, with Jamal Igle and Juan Castro's artwork perfectly fitting the mixture of tones too. The publisher Ahoy comics really has been putting out some stellar stuff, with this comic being a prime example.