Are, "Super Follows," a Dumb Idea or Secretly Genius Because of What They'll Most Likely be Used For? 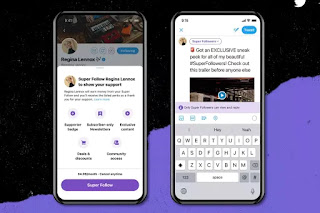 Twitter is a place where I honestly don't want to see half the bile spewed out by people for free. With this in mind, Twitter is now going to make it where you can have, "Super follows," so you charge people to see select tweets. This...this is dumb, right? In an example twitter gave, someone could charge $4.99 so people can see all their tweets as some kind of perk. Again, this is stupid. Who is this for? Why would I pay to see anyone's tweets? Oh, wait. Oh, okay.

This is some weird effort to compete with OnlyFans but Twitter doesn't want to say that, isn't it? I mean, the only thing I could imagine people paying to see on Twitter is nudie pics and other pornographic content. That could be secretly genius where someone has a Twitter account full of sexy but, "Safe for work," content and then if you pay that extra monthly fee all the dirty tweets unlock--with Twitter getting its cut. As absurd as Super Follows sounds at first blush, that is the one way I could see it working-out for Twitter. Otherwise, few people are going to pay extra to see some celebrity behind-the-scenes tweets or get exclusive cooking recipes from a professional chef or however Twitter is trying to spin this as not being used in a pornographic way.

Super Follows sound incredibly dumb at first, then you realize how the fact people are always super-horny online could make them actually quite profitable. Twitter hasn't admitted Super Follows could be used for this, but come on, we know they considered this and probably won't care what is getting posted as long as everyone is a consenting adult and they get their cut. There are lots of thirsty people online and Twitter might just have thought up a way to quench some of them. Clever.