When You Say Your War Game, "Isn't Political," You Sound Stupid 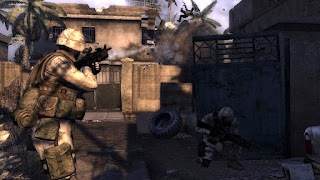 War is political. Wars are fought over land, power, religion, etc. and they are started by those in some kind of political power. When you go to war you are engaging in a political act. Trying to pretend all the lives lost on either side or amongst civilians in war wasn't at its root political is dumb. Even if your reasons for fighting in a war are good, they are political. The 2nd Iraq war was predicated on countless lies and that is a fact. Whether you choose to ignore that or acknowledge it, you are committing a political act. Focusing on one of the most bloody battles that took place with a game titled, "Six Days in Fallujah," is political.

It's political when you try to present your story as a, "Go America, we did our best!" story and refuse to talk about the potential war crimes that were committed--white phosphorous, anyone? It is political if you were to make it a story that portrays the United States as a barbarous invader. Whether America is the hero, villain, or neither, talking about a battle that took many American lives and civilian lives is political! Acting like it isn't goes and disrespects the dead; it makes you sound stupid. The game's head is named Peter Tamte and he has said that, "Six Days in Fallujah," isn't political. He sounds dumb.

"Six Days in Fallujah," was in development and canceled years ago because of controversy. Now it's back and seems to be desiring to avoid controversy by any means it can against all logic. Lean-in to the controversy! Give us another game like, "Spec Ops: The Line," which looked closely at the horrors of war and its political impact. Don't give us another bland game about war that is trying to, "Not be political," where that basically just means having a tone along the lines of, "Rah rah America! Let's kill the foreigner bad guys!" Either leave this game canceled or actually acknowledge the political ramifications of war when you release it. You don't go sounding stupid about how your war game, "Isn't political."