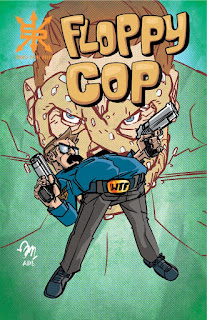 I was a big fan of the comic, "Floppy Cop," by writer Dan Dougherty and artist SethDamoose. It focused on a police department made-up of zany characters, including the titular floppy cop who lacks certain bones and...flops around. It was absolutely hilarious and now there is a Kickstarter going for the 2nd volume to be released as one book that people can purchase and read. Considering how great the first mini-series was I imagine the second will be awesome too. I recall in Dan's newsletter he actually said how volume 2 had been delayed to adjust certain elements in the story in respect to recent events in America with policing, so it's good they are being culturally sensitive while being funny too. I'm actually quoted on the Kickstarter page, which is a nice compliment that they enjoyed my previous review so much they wanted to blurb me. I without a doubt would recommend backing, "Floppy Cop Volume 2," if you like zany humor! Check out the Kickstarter here.