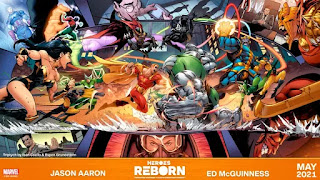 Back in the 1990s, there was this event of sorts where many of Marvel's major characters seemed to die fighting a villain named Onslaught. They didn't die, however, they warped to World created by Franklin Richards of the Fantastic Four (because he was secretly super-powerful). The mainstream Marvel Universe dealt with thinking the Avengers, Fantastic Four, etc. were dead and they got their own comics. The Earth was revisited sometimes and one character from that alternate place--Rikki Barnes--has been living in the regular Marvel Earth for some time. There is going to be a new, "Heroes Reborn," event and absolutely none of what I told you matters because this is a whole new thing. Yeah, comics.

Starting in May, the current, "Avengers," comic by Jason Aaron and Ed McGuinness will take us to an alternate reality where the Avengers were never formed. Instead, the Squadron Supreme are Earth's greatest heroes and Phil Coulson leads them. Thor never got his hammer, Peter Parker is simply a reporter, Doctor Doom became the Juggernaut (somehow), Captain America stayed frozen in ice, and the only Blade of all people remembers that this is a wonky timeline. This isn't a massive event, it seems, just a fun arc in the current, "Avengers," comic. As someone who likes the Squadron Supreme in its various iterations (basically Marvel riffing on the Justice League) and who thinks Blade is cool, I think this may be interesting. 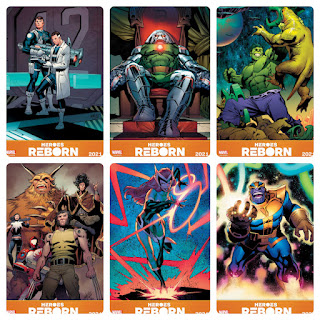 I really appreciate this is just a story arc (for now) and not some massive event with a ton of tie-in comics. I'm well-known as being a fan of alternate-universe/what-if tales between this having some cool characters involved and featuring a messed-up timeline I'm gonna check it out. I just don't get why Marvel went with the name they did considering this is nothing like the original, "Heroes Reborn."

Posted by David Charles Bitterbaum at 11:04 AM