America, What the Hell? 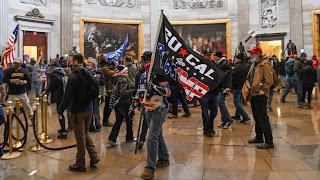 This was the end goal of Donald Trump and his dangerously loyal followers. Either he wins or he turns on everyone and takes us all down with him in a chaotic mess of brutal rage.  He was the Frankenstein monster of the Republican Party, and the monster always turned on its creator (in every version of the story told). They gave him power and he ended-up encouraging rioting, mayhem, and basically an attempted coup of sorts to keep him in that much-desired power. For a party that claims it supports, "Law and order," it was telling to see Trump's fans breaching a Federal property, exchanging gunfire with police, and otherwise disgusting anyone with a lick of common sense. When you deny reality and stoke the flames of violence, you reap what you sow. Trump is probably pleased to be sowing this utter shitshow of his domestic terrorists indirectly doing his bidding.

One thing I noticed as the MAGA-mob broke into the Capitol was how the police presence couldn't do much due to a lack of numbers. It is funny that when it is people of color protesting we get a literal army protecting our buildings and monuments, yet white folk literally break into a Federal building and disrespect it because of a lack of security to prevent such a thing. You didn't hear about Black Lives Matter protestors busting into the Capitol because if they had even tried they would've been shot before they finished going up the stairs. 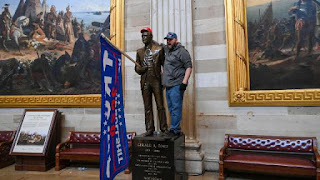 I am disgusted at what some residents of America think is acceptable behavior. People peacefully protest for actual causes and are condemned. Domestic terrorists wreak havoc and the President applauds them. You brought this on yourself, Republicans, don't act like you can distance yourself from your Frankenstein's monster now--you're Dr. Frankenstein, the monster bears your name.