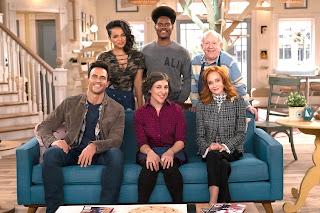 This show has been absolutely ravaged by critics. I can see why as it is kind of corny, dated, and the way Mayim Bialik breaks the 4th wall constantly to talk to us--the audience--is a little jarring. That said, I moderately enjoyed the first three episodes my wife and I watched. Now, yes, the first episode/pilot is pretty bleak. However, I have often said you can't judge a show by its pilot, and that holds true here.

Mayim Bialik plays a woman named Kat who is 39 (the show often brings-up her age), single, and spent her savings to open a cat cafe stocked with wacky employees (Leslie Jordan is always a funny fellow). An old college crush has moved back into town and works at a bar across the street from her cafe, her mother is an overbearing mess, and all of this combines to create kinda-funny-but-really-formulaic shenanigans. I didn't hate it. 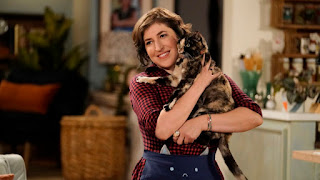 Bialik is a skilled actress whether she's playing things more deadpan or doing slapstick and the entire supporting cast is really trying their hardest too. There is the occasional joke with a nice bit of edge to keep viewers from getting too complacent and if you like cats there are in full supply too--Bialik's character owns a cat cafe, after all. It's inoffensive fun and there are worse ways to pass a half-hour.

"Call Me Kat," seems like the kind of show that either is going to last one season and quickly be forgotten or inexplicably develop a dedicated following and go on for years upon years. Whether it will totally bomb or manage to survive for a while depends on if enough viewers like Bialik's and/or cats enough to give this a chance and stick with it. Without Bialik I'm not sure the show would even have the slightest chance, but she brings the chops that make this watchable. I didn't love it, but as I said, I didn't hate it.

Posted by David Charles Bitterbaum at 11:32 AM