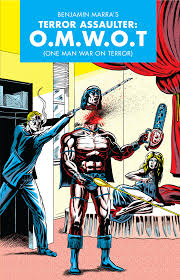 As a part of my Valentine's Day, "Four-Way," of posts I now present some thoughts on the portrayal of the male Id within Benjamin Marrra's, "Terror Assaulter: One Man War On Terror," or "OMWOT," for short. There have been many reviews of the comic spread around the internet, mostly positive and showing an affection for its darkly violent and sexually-charged satire (like the earlier-discussed, "Fukitor," it is really obvious Marra has his tongue thoroughly in-cheek for this comic, but it works a bit better here). The plot essentially is that there is a division of agents known as Terror Assaulters who were created by the United States government in response to 9/11 and they exist to keep the nation safe no matter what. This leads to a whole lot of fighting, shooting, and fucking.

If "OMWOT," were written as a serious piece the reader would think it came from the mind of a sex-obsessed thirteen year-old who desires to be, "Edgy," by working in some politics between the gunplay and penetration. Marra seems to have taken the rawest form of the male pyshce and spilled out on the page for everyone to observe in a mixture of bemusement and disgust. One interesting element is that our main character, the One Man War on Terror is happy to have sex with men or women. He doesn't have a sexual orientation, he just is pure sexuality, in all its fluidity and desire. He'll kill men or women, and fuck men or women, all in the name of our God-blessed America, motherfucker! 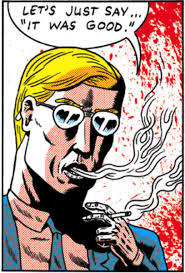 Continuing this concept of a simplistic-yet-clever writing style, the comic will often have characters declare aloud the action they are taking--even though Marra's art makes it quite evident. There is plenty of, "You shot me in my [body part]," or our character describing the next action he's going to take during sex. Oh, and the running gag of the OMWOT stating, "Let's just say..." before making a threat or a statement that doesn't even need that first part of the sentence seems like something that should get old, but strangely doesn't.

Marra of course often makes satirical comics (my big article on, "Gangsta Rap Posse," being one example), and that is on full display here, and man-oh-man does Marra really represent fascinating warped versions of reality through his works! It is scary how much this is like the meant-to-be-taken-at-face-value, "Holy Terror," with its heroic image of the white American man shooting-up foreign threats, having some sex (with a man or woman with the OMWOT), and then we roll credits while a childrens' choir sings, "God Bless America," in front of the Statue of Liberty. 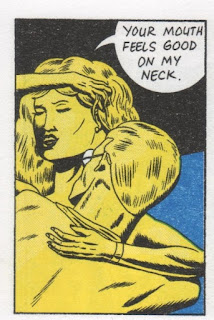