Fuck You, Kanye West is Still Awesome AKA My Review of "The Life of Pablo" 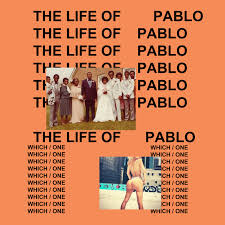 I hear so much chatter about Kanye West. Everyone has an opinion on how terrible he is. Taylor Swift gets applauded for throwing shade at him in her acceptance speech for Album of the Year (which by the way, totally robbed Kendrick Lamar), the media mocks him as a rude narcissist, and yeah his own behavior doesn't do him any favors, but you know what?

"The Life of Pablo" proves he still rocks, warts and all. I'll admit I had some concerns, but when I saw him drop his verse in an SNL skit this last weekend (that is on the album too as, "I love Kanye,") I knew that behind all the media-nonsense of his marriage to Kim Kardashian, making outlandish statements, and etc. that the genius-Kanye West was still lurking in there with usually more visible jerk-Kanye West. Here's the skit:

UPDATE: It seems the video got taken down. My apologies. NBC's official site might have it though?

"Yeezus," was a solid piece of work but felt more disjointed and lacking than anything. While "The Life of Pablo," may not be at the level of his debut, "The College Dropout," or his arguable masterpiece, "My Beautiful Dark Twisted Fantasy," this is a great piece of work. Do note that I had to get a trial subscription to Tidal that came with a free Beyonce track to listen to, "The Life of Pablo," as it currently can only be found (legally) on that site, so will someone please remind me in the next 90 days to cancel it in order to avoid being charged? Seriously though, that is kind of a hassle, but I'll go through a lot to get to hear Kanye West kill it on the track more than not.

Keeping with the trend of West dealing with his issues through music (and often showing the vulnerability his critics who don't listen to his music say he lacks), "The Life of Pablo," is messy, at times abrasive, and as often unsure of itself as it is cocky. As West states on the track, "Father Stretch My Hands Pt. 1," in regards to attention he gets, "Everybody goin' say something/I'd be worried if they said nothing."

West of course brings in a litany of collaborators, with some turning in incredible verses (Chance the Rapper on the first track, "Ultralight Beam," is a treat), and other's seeming criminally under-utilized (Andre 3000 simply provides background vocals on, "30 Hours," despite my praying he would bust out a rap too). If anything, at times West runs the risk of being upstaged by the amazing talent he brings in to work with him, with Kendrick Lamar's dazzling verse on, "No More Parties in L.A." rivaling West until he makes sure to match wits with lines like the ones in the image above.

The sound and isn't as electronic as the critically-divisive, "808s and Heartbreak," or the grinding and almost-mechanic sounds of, "Yeezus," but there are for sure blasts of that harsh lo-fi in between the soul-samples and occasional softer instrumentation ("Feedback," has screeching sounds that live-up to the title for sure). Not every track is breathtaking, with the song,  "Highlights," feeling auto-tuned to death and like it just wants to meander around before concluding (making it interesting West performed it first on the recent SNL as its so drab). "Fame," isn't that great for me either, but that is more because I really dislike Rhianna than anything else. Still, so much is just so good that the occasional clunker can be accepted. 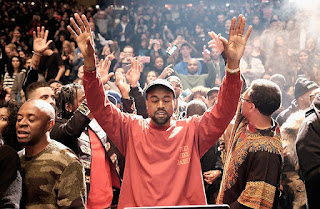 Kanye West may behave like an asshole and be, rude, self-obsessed, and all those other bad things, but at the end of the day he's still a musical genius--so I apologize if my post's headline was a little harsh, but the whole album seems to be yelling the same thing--"Fuck you, I'm still awesome, regardless of all the other bullshit." So yes, I do in fact love Kanye in the manner of how Kanye Loves Kanye.
5 out of 5 stars.
Posted by David Charles Bitterbaum at 3:06 PM