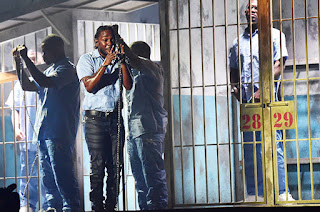 Main Rant: First things first, Kendrick Lamar's album, "To Pimp a Butterfly," is album of the year, no ifs, ands, or buts. Many agree (who aren't mad about it) that he gave the only performance that really mattered at this year's Grammys. From the start with his appearing in chains and singing his song about the ingrained racism within our country--"The Blacker the Berry"--Lamar was intense, unafraid to make a point, and basically the opposite of everything that's wrong with the Grammys and Taylor Swift--e.g. "Sanitized, Self-Congratulatory, and Safe."

It truly was was wishful thinking to believe he would win Album of the Year. Sure, winning Best Rap Album was a foregone conclusion, but to see someone who so unabashedly stands-up and speaks truth-to-power through incredible music would have been amazing. The closest to that kind of moment we got was when Kendrick took to the stage for his aforementioned first song, seguing into, "All Right," and concluding with a new song where to CBS' credit they did some amazing camera-work with their close-ups on Kendrick's intense movements and words. 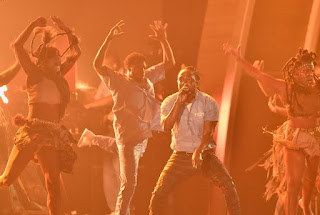 Kendrick Lamar created a masterpiece in the form of, "To Pimp a Butterfly," but it seems the Grammys would rather not give it the highest form of recognition when something relatively tame and pleasant like Taylor Swift is another option. At least I can look back fondly on one time the Grammys did get it right, giving Album of the Year to OutKast for their masterpiece, "Speakerboxxx/The Love Below."
Posted by David Charles Bitterbaum at 1:57 PM