V-Day Four-Way Part 1: Fukitor and the Question of if Being Tasteless Just to Shock People is Still A Form of Social Commentary 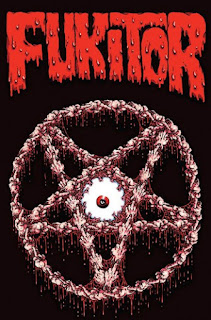 Please note that most links are not safe for work, even if this article is
Let's kick-off the posts on this day of love and romance by talking about one of the more nasty and horrific comics out there--"Fukitor."

From creator Jason Karns comes a series that has spurred much debate on what exactly it constitutes. This is a comic the creator doesn't want taken seriously, so is it satire? What is it mocking though other than the fact that many human beings are terrible people? Almost every page drips with blood and entrails, with the violence only being rivaled in  quantity by the breasts and dicks. Back when The Comics Journal even mentioned, "Fukitor," it lit a fire in the comments section, followed by the owner of the TCJ--Fantagraphics--then being able to have its cake and eat it too by releasing a collection of the series  (which I purchased back when it came out in 2014)on its then-new small-press imprint, FU Press, followed by then having the TCJ post a review of the collection that was harsh on it; I ain't gonna hate though, because they could have just as easily told a reviewer to say some glowing things about the comic in hopes it would spur more sales (or would saying this is a mean-spirited and ugly series be more of a selling-point? Hm).
It isn't hard to find someone who hates this series on the web, as well as much discussion about cultural context and where this comic falls on that spectrum. Basically everyone can at least agree, "Yeah, it looks pretty offensive and bad, plus it's supposed too," before the arguments start. As for what the debates entail, it all seems to basically come down to the question of if being tasteless just to shock people is in itself still a form of social commentary. To such a question I say, "Maybe? It depends," as it really can vary based on the situation. As for this particular comic, "Fukitor," I would conclude there definitely are some parts where it feels like Karns is maybe making a point, but so often that point is drenched in viscera and bodily fluids that it is all-but-unnoticeable.

"Fukitor," is a grotesque and lascivious piece of work, yet at the same time is also trying to insist how behind all the vulgarity that, "Hey, I'm really trying to making a point here!" That may be, but in the end, "Fukitor," is moreso just hilariously absurd than it is deep in any fashion. At least Karns is a good artist in the sense his hideous imagery looks appropriately awful. That counts for something, right?
Posted by David Charles Bitterbaum at 12:31 PM