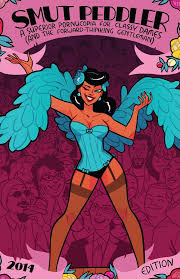 What exactly sex-positive means could be taken various ways, but basically the Smut Peddler anthologies (there was a 2012 and 2014 edition, plus a Kickstarter just concluded for two new comics within that line) present sex as what most of us hope it to be: Fun, enjoyable, consenting, and arousing! An inclusive series, the "Smut Peddler," comics have always included a variety of genders and orientations getting-it-on with gorgeous artwork by talents both better-known and mostly unknown.

I own the 2014 edition (bought it at the most recent Project Comic-Con!) and found it to be a book of gorgeous artwork, fun stories, and basically what the subtitle declares it to be--"A superior Pornucopia for classy dames (and the forward-thinking gentleman)." All the titles I've discussed have been fascinating to cover this Valentine's Day and I hope you had a wonderful February 14th too!
Posted by David Charles Bitterbaum at 9:08 PM