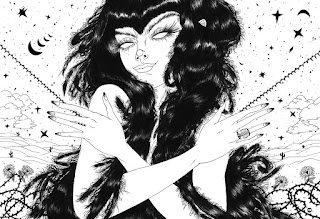 Note that basically none of these links are safe for work, even if this article is.

I am of course always scouring the web for interesting artwork, writing, comics, etc. I stumbled across this fascinating interview with artist and comic-maker Heather Benjamin, and proceeded to take a trip into the horrific, and erotic world that is her website. One of Benjamin's earlier works was titled, "Sad Sex," and occured over a number of issues. Benjamin says herself in an older interview that she isn't concerned with having specific story-lines or such, almost making me think of her work less as comics and more as artwork-pieces that are occasionally sequential. Any sort of, "Plot," isn't important here though, because I think (and Benjamin herself confirms in the same just-linked interview) that it's really about the emotions--"...and I also like to not be too straightforward. I do enjoy just picking one feeling or moment or whatever that I’m trying to focus on and just ornamenting it and reworking it as a single drawing. It’s definitely a weird emotional process for me to go through, and I feel almost like, cleansed of whatever fucked up thing was totally bothering me by the time I’m done hashing it out. At least for a little while."

Benjamin can make artwork that is extremely pretty, as the less-explicit images on this post illustrate. What she truly excels at, however, is taking something generally pretty (or at least, "Hot,) like sex and making it incredibly ugly. Something we as humans often ignore is that sex many times isn't that gorgeous, so-to-speak. It is sweaty, noisy, and has a lot of fluids and emotions mixing together. Benjamin expresses this with her pieces discussing the guilt of masturbating to the thought of a friend's boyfriend, or arousing and disturbing the reader with the cover to her latest collection of work, "Romantic Story," as it features a woman spread-eagle with ants crawling all over and around her. Even a cliché sweet scene of a man and woman about to kiss takes on a more twisted motif with the introduction of insects crawling about. 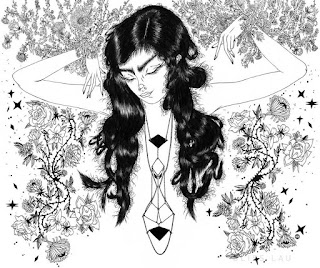 Heather Bejamin's pieces evoke a strong reaction from the viewer. Some may only feel disgust and confusion, others may see a twisted beauty and want to explore her work further. Good art has that impact which makes you feel, and Benjamin's illustrations definitely do such a thing, especially when exploring the hideous within the sexy. I would recommend checking her website out and purchasing her works if you find yourself as intrigued as I have been by her artistry.
Posted by David Charles Bitterbaum at 6:37 PM