Some of my Favorite Comic-Creation Teams Part 1

Working Together
I was thinking the other day about how there are comic writers, artist, colorists, and letterers (and those who combine some of those skills). There are some really stellar teams that makes comics though, and I felt like discussing some of them, as so often we talk about individual creators, but sometimes the best work comes from a duo (or trio). Thanks to The Comics Reporter for giving me the idea to do this post with my own list of stellar teams! 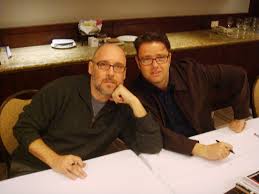 Ed Brubaker and Sean Philips
These guys have been just making stellar piece after stellar piece. Whether it is super-powered folk in, "Sleeper," and, "Incognito," noir with a flair in, "Criminal," horror in, "Fatale," or examining the seedy underbelly of 1940's Hollywood in, "The Fade Out," these guys just make hits. I may not have loved, "Fatale," as much as some people, but for every one of their works someone may not care for there are still plenty that are an absolute delight. 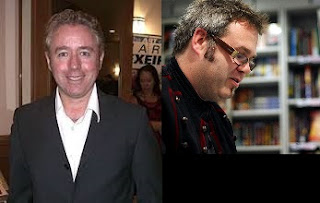 Mark Millar and Bryan Hitch
Mark Millar is a writer who can really grate on my nerves. His plotting can leave much to be desired and his writing just is so, so, so melodramatic sometimes. That said however, his work with Hitch during their run on, "The Ultimates," and a few other times they've teamed-up has generally helped to bring out the best in Millar and Hitch. Yes, "The Ultimates," was delayed to a hilarious degree toward the end, but when all collected together it reads quite amazingly with its mixture of satire, action, and the clever way it is almost mocking super-hero comics whilst at the same time serving as a love-letter to them. Millar went on to do much more cynical stuff that lacked the heart of, "The Ultimates," and Hitch has done some decent stuff since then too, but boy were they quite a team back some years ago.

Grant Morrison, Chris Weston, and Gary Erskine
Grant Morrison and Frank Quitely is the obvious choice, and while they are a stellar pairing who have made some incredible stuff, if I could pick anyone to make a comic with Morrison, I actually would try and reunite the team behind my favorite comic ever, "The Filth." Consisting of Morrison on writing, Weston on art, and Erskine on colorist duty, "The Filth," is just an amazing piece of fiction. With its mixture of meta-fiction, dark commentary on society, and being what one could argue is the post-modern comic of all post-modern comics, "The Filth," is what happens when someone throws every idea at the wall in an effort to see what sticks, and somehow against all odds everything, "Sticks," and a disgustingly beautiful creation is made. Yeah, I would love to see this trio work together again. 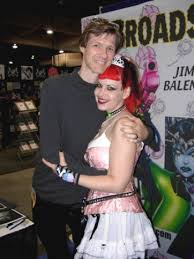 Jim Balent and Holly Golightly
Jim Balent is a writer-artist who is derided by some but also loved by many. His long-running comic, "Tarot: Witch of the Black Rose," he has done with his wife, colorist and letterer Holly Golightly, has earned a multitude of fans thanks to the mixture of story-genres, incorporation of wicca, and gorgeous artwork that is made even better thanks to the lush color-work and carefully-placed word baloons. I would say this collaboration became even closer when Balent's "Tarot," comic crossed-over with Golightly's project she writes and illustrates, "School Bites," with issue #90. This issue was an expert blend of both creator's illustrative styles and shows that Balent and Golightly not only picked great spouses in each other, but superb collaborators too.

We Will Be Right Back!
I've shown you some of my favorite comic-creation teams, but I need to take a little break now. I'll be back a little later with the rest of my favorites.
Posted by David Charles Bitterbaum at 4:21 PM