I Was Wrong; Ed Benes Isn't A Hack After All. Greg Land is Though!

Another Post Where I Admit Being Wrong
I'm wrong sometimes, it can turn out that a, "Suicide Girls," comic actually is good, or I can make a list of my assortment of mistakes because I ain't too proud to admit fault.

I made a post years ago where I called Ed Benes a hack. I had some people tell me it was too mean, but I stood by it. I suppose the biggest element was how I thought the fact he would do commissions of popular characters in sexual poses to be tacky. The thing is though, I was mulling over one day if maybe I was too mean, and if maybe, just maybe, Ed Benes actually wasn't that bad an artist? 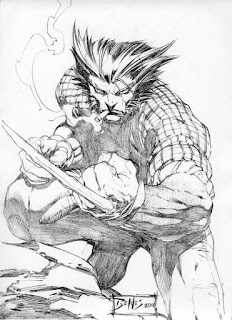 So, I went and looked at more of Ed Benes art. I also considered how other creators whose stuff I've enjoyed have done plenty of highly sexual works, and that a lot of creators will do commissions which are really raunchy because if they can make a decent living by doing that in addition to their love of comics, they'll do it. I guess the fact that Ed Benes wasn't embarrassed about it and would proudly show off his commissions just was a surprise. The main thing is, as a person with a functioning libido I do enjoy sexy artwork when its done well, and I've concluded after giving his stuff a second look Benes does in fact do it with skill. Plus, he also can draw general super-hero stuff well too, be it fights or just generally imposing-looking stances.

Ed Benes might make a chunk of change doing sexy drawings for folk of popular characters, but why should I hate on him for that? The fact that his art actually doesn't look too shabby--be it G-rated or R-rated--is the important factor; I mean, if it looks good, it looks good. 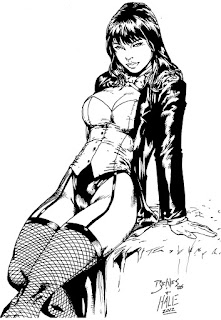 Now then, for an example of someone who truly is a hack, just look at Greg Land. His artwork is stiff, looks photo-traced, and all his female characters have the same damn smile. It's plastic-looking and just atrocious. Greg Land is someone whose work just makes me recoil in disgust, and can be called a hack. Ed Benes though? He's okay, so I'll say it: I'm sorry Ed Benes, you aren't actually a hack. I was wrong.
Posted by David Charles Bitterbaum at 11:43 PM