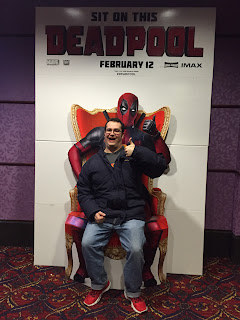 I'll make this relatively brief as, "Deadpool," did just come out and I don't want to go and spoil a bunch. I saw it earlier this evening and shall share some opinions for those of you who are a bit curious about what I may have thought of the flick. Basically, I really liked it. It is one of the small number of R-rated super-hero movies and it earns that rating for sure. There is so, so much violence, a lot of swearing, and of course some scenes of sex and a dash of nudity. It also is really funny.

The jokes come fast and hard, and if that sentence had just been said in a this particular movie you can be sure good ol' Wade Wilson would have already made a dirty joke out of it. Ryan Reynolds brings his unique charm that walks the fine line of being too much and just enough with attitude, kind of like Deadpool himself in the comics actually. Oh, and if you're wondering if it has those little bits of humanity that make Wade someone the audience can relate to and care about, the flick does work a little of that into this too.
It really is remarkable this got made, a super-hero movie that relentlessly mocks other super-hero movies--even ones from different studios--and brings with it a near-relentless stream of unapologetic gore and swear-words. To think the creators of this film were able to say, "No," to making a PG-13 film that would quite possibly be not nearly as good is just amazing (and it appears to already be paying off and will be quite a profitable film indeed).

The movie isn't without flaw (the main villain is pretty bland), but the never-ending stream of usually-great jokes (some land with a thud, but most are solid) and superb action scenes gives us a film that is a bunch of fun, but also throws in a some of heart now and then too. I would recommend seeing, "Deadpool," if you love super-hero movies, or if you hate super-hero movies and want to see something that insults them...while actually being a really good version of what it is making fun of. Just please, don't bring your little kids to this. Seriously, if I see any news stories about, "Outraged parents," complaining they took their 6 year-old to a movie clearly advertised as a bloody and raunchy good time I will put my head in my hands and let out a loud cry for humanity.
4.5 out of 5 stars.
Posted by David Charles Bitterbaum at 11:52 PM