"Her Story." Expertly Provokes Thought as Well as Emotion

I was able to purchase, "Her Story," on sale from GOG and enjoyed it quite a bit. As for what kind of game this is, imagine if there were a game where you're sitting in front of a really old police computer and your purpose within this title is to search for keywords. Then, you see if other noticeable words pop-up in further video-clips, and you keep typing words until you have a solid idea of what truly happened in the story being told. This might sound potentially terrible, as you no doubt can remember the day of FMV games that were in actuality just atrocious movies that asked you to occasionally push a button. Well, even though such a concept sounds like it might be horrendous, "Her Story," takes a game that is about little more than watching a woman telling her story (hence the title) and makes it quite intriguing. Winning awards for its originality or just in general for being stupendous, "Her Story," is a fascinating piece of detective-work.

This is a game that could rise or fall based solely upon the performance of our main, "Character," but thankfully Viva Seifert does a wonderful job as a woman concerned about her disappearing husband. The talked-about but never seen husband is the crux of the story (at first), as we witness in the assorted video files spread-out over a period of days that what once seemed pretty clear-cut becomes more and more strange. I won't spoil the plot, as for better or worse it has some twists that seem a bit over-the-top, but it isn't just the story that matters here. No, it's the discovery of the story. 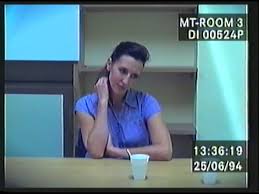 Watching the video clips and noticing how certain statements or asides stand-out then helps you, the player, to search the video-system and begin to piece certain elements together. You might have your own personal, "Ah-ha!" moment as I did when playing the game that assists you in realizing just what could actually be going on, and the wonderful thing is the game doesn't manufacture these moments--it is all down to you as the person watching these clips to piece-together everything in an attempt to solve a increasingly bizarre mystery.

"Her Story," is a fun example of the possibilities for storytelling that games can open up, serving as a mixture of a game and a movie. It isn't for everyone, as if you only enjoy online shooting-battles or exploring huge worlds you'll find this title absolutely stifling in comparison with its single simulated computer screen (plus it only takes a few hours to play). If you're willing to try-out things that are a bit more experimental or unique however, "Her Story," is definitely an experience worth playing.
5 out of 5 stars.
Posted by David Charles Bitterbaum at 2:13 PM