The Social and Political Differences Between the America of Frank Miller's "Batman: Year One" and "Holy Terror"

Another Of Those Rare Fully-Serious Posts.
Yeah, I'm actually going to do it again, I'm going to make one of my essay-type posts where I look at a subject seriously and discuss it. Today I'm going to talk about Frank Miller and how he seems to view America. Miller has made some amazing comic works but lately hasn't been that popular with some folk after saying some really nasty things about Occupy Wall Street--which if we are honest started out as a good idea that has now become one big mess that is mostly being ignored anyway. The thing is, the Frank Miller of today is so much different from the Frank Miller of 1987, and I think they view America in vastly different ways--ways best illustrated by two of his works.

Batman: Year One OR A Man Dressed As a Bat Fights The Rich 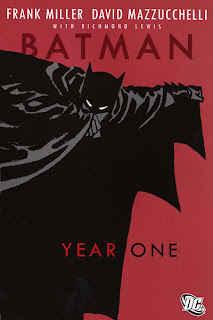 Nowadays Frank Miller calls people protesting America via Occupy Wall Street louts who need to join the military and fight extremist Islam (his words, not mine). However, in 1987 Frank Miller painted a picture of an America through the famous Gotham city that was ruled by a cold elite who had Batman to fight them. Batman: Year One doesn't really have any super-villains, it has Batman taking on the city of Gotham's rich and politically powerful who try to get him killed for challenging their rule. 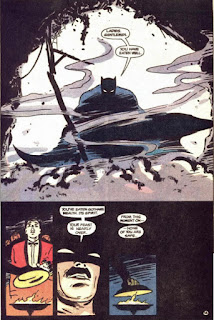 The only other decent person is a police officer named Jim Gordon who has been transferred to Gotham. He's middle-lower-class, dealing with a corrupt Commissioner, and miserable. The world of Batman: Year One is not pleasant. It's full of crime, its grimy, its a hard place to make a living. This is the kind of world that Occupy Wall Street probably fears America is destined for. 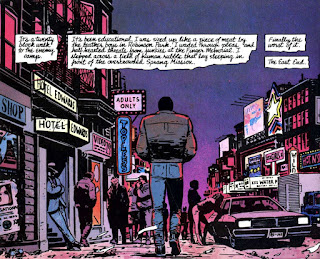 This Gotham City is representative of an America Jim Gordon is terrified for his son to be born into, because it's so vile and terrible. This is an America where Batman isn't fighting the Joker or Clayface, he's fighting those in power because through his working for the helpless he inadvertently is making the so-called 1% very nervous at the idea they won't maintain an iron grip on everything. It's very telling that in the few scenes where Batman has to be, "Bruce Wayne: Playboy," so as to create the illusion he is one of these rich and uncaring few, he acts out as if a caricature of the people he is fighting against--because that is how Batman/Bruce Wayne really views those cold, rich people who are keeping the poor men and women down in his mind.

The book doesn't end with any big victory either, it just sort of concludes with the year coming to a close with Batman helping Gordon rescue his son from some of the elite's kidnappers. There is still evil in the world and a lot has to be done. After all, you expect the world to change in just one year of a Batman? It's very anti-climatic, it shows you can't just "win". Miller did a complete 180 degrees on all of this with Holy Terror.

Holy Terror AKA The Sorta-Batman Kills A Lot of Terrorists 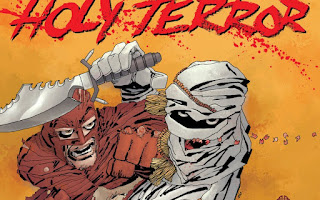 Frank Miller recently made a book called Holy Terror which is about a man named the Fixer protecting his city of...look, let's be honest here folks. This is a Batman story. Frank Miller started writing this book as, "Holy Terror, Batman," but at some point it became too extreme for DC comics, so he changed a few things and made it a story about a man named the Fixer who is pretty much Batman, teaming up with a cat burglar named Natalie Stack who is essentially Catwoman, as his home of Empire City (pretty much Gotham) is attacked by Muslim terrorists and they fight them off. 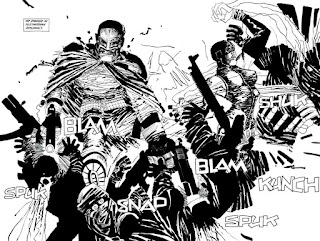 Unlike Batman: Year One, this is both written and illustrated by Miller, resulting in his interesting art style and odd habit of doing black-and-white with color occasionally dashed in (sometimes for no apparent reason). Here, the bad guy is not anyone wealthy, no, it's a lot of Islamic terrorists. This is a world where America is so great, a young Islamic girl can't help but drink some beer before blowing herself up and having nails rain down on the city, whilst other terrorists fly jets into Empire City's statue of liberty analogue. This is an America where you can go to an underground base, blow up the bad guys, and you've solved terrorism. Yes, this is an America where once you catch one of those dirty Muslims (who is a terrorist of course, but they probably all are so you know, its all good) its fine to joke about how his name is probably Mohammed and then torture him until he tells you what you want, because here in America torture is now apparently okay. 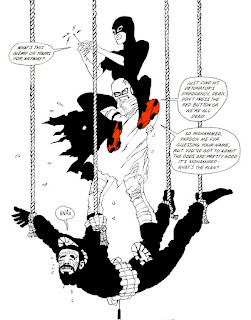 In this new America Frank Miller lives in there are no flaws, its a shining jewel, and we need to look out for those people who don't believe in Jesus (although Jews are okay because Israel keeps those radical Muslims in place). This is a strange book, and if you handed me both this and Batman: Year One, I would have thought Holy Terror came early in this man's career and Batman: Year One came later, because Holy Terror is just not that well-written (and this is looking at it objectively, with no political slant). It's simplistic in how its little more than a simple revenge fantasy--some bad people hate us, we will kill them, and everything will be alright. Quality aside, it is just so striking how differently this Miller thinks than the Miller of the past.

And So Here We Are
From 1987 when Batman: Year One first came out as individual comics to the first printing of Holy Terror in September 2011--which it stresses to point out was in September, as it wants you to be aware of how its 10 years after when we were attacked by terrorists in real-life--Frank Miller has changed a a lot. From just looking at these two books you see a Miller who has gone from a young and perhaps liberal view to an older and highly conservative outlook. Also, Batman: Year One is much better than Holy Terror, but that isn't due to politics so much as how it just has a lot more care put in its craft.
Miller had a view that almost mirrored that of Occupy Wall Street, writing about corrupt rich people and a vigilante fighting against them, and then Miller changed and it became about how our nation was perfect and it was those outside of it who wanted to tear it down, so shut up with those protests because it's America, "Love it or leave it." Batman Year: One also ends without any easy answers, whereas Holy Terror wipes the bad guys from the map. Perhaps the Miller of today thinks the decisive torture-and-kill methods of The Fixer are better than Batman's pledge to never kill someone too.
Some people on the internet who are mad at Miller for his statements about Occupy Wall Street say he's gone crazy and is obsessed with fighting all forms of Islam, not just extremism, and that it's all he thinks about. I don't know if that's true because I lack the ability to go into Miller's mind. I don't think he's crazy so much as his views just radically shifted, however. The sad thing is, when your views shift so much and you want to show people about it, you really need a better book than Holy Terror to do so. People who reviewed it objectively putting aside politics still weren't that big on it other than liking some of the art.

What's the lesson in all this? I'm not sure there is one besides the fact that people's views change, at times dramatically. Also, the way Miller's views changed, people who once identified with him now hate him and others who found him annoying in the 1980s when he was doing the "Strip AIDS" fundraiser and other then-highly liberal things probably now love him and would invite him to a Tea Party rally. Things just really change with time, I suppose.
Posted by David Charles Bitterbaum at 12:10 AM