For A Book About A Great Movie, It's Lacking--BFI: Citizen Kane 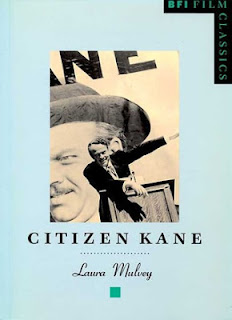 Eh.
I've enjoyed viewing Citizen Kane at various times in my life, and have reviewed it as well on my blog. I also really enjoy the BFI Film Classics books. Therefore, it would make sense this book should be wonderful, right? Well, color me surprised that I found this to be just average. Perhaps the problem is how the book tries to approach Citizen Kane from a feminist perspective which while interesting may not be the best idea for a flick all about a man. Yes, we get lots of Freud-ish stuff about Kane and his relationship with his mother, etc. etc. but the book doesn't focus on the majestic nature of the movie that is standing right there, instead focusing-in on odd points of psychoanalysis.

I think of Citizen Kane as being at its heart a story about a man who was horribly broken, and no matter how hard he tried to impress people--be it his friends or the nation--he never realized that to fix himself he had to look inside, not outward to the approval of others. I think this book misses that and instead injects a different viewpoint into Kane that while somewhat interesting just isn't what one would expect from the BFI books that give an overall sort of look at the movies. Eh, they can't all be stellar.
2.5 out of 5 stars.
Posted by David Charles Bitterbaum at 2:50 PM