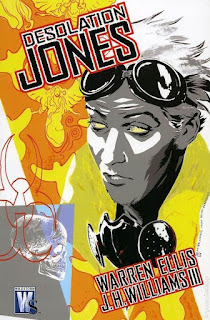 Back in 2005 Warren Ellis started a comic that came out every 2 months called Desolation Jones. The first six issues were illustrated gorgeously by JH Williams III, and then the 2nd arc had completely different art before suddenly ending with the eighth issue. That's right, the ninth just never came out. That was 2007 and now we're in 2012 and with no more Desolation Jones in sight so one might wonder why I read this and/or how I got the seventh and eighth issue that aren't in any trade (clearly).

Well, one of the malls in my area has a big annual book sale in their parking garage and there was a section with some comics in long boxes. Besides oddly enough having almost every single issues of the Seven Soldier of Victory mini-series besides the Frankenstein one for some reason, there were also all eight issues of Desolation Jones neatly together, for a dollar each. Why so cheap? Well, Desolation Jones wasn't one of Ellis' most popular series it would seem as I've heard a mixture of praise and negativity for the comic. Anyways, I picked up the comics for cheap and read them, and Desolation Jones is indeed a very odd little comic with gorgeous art for the first six issues but a story that isn't always amazing. 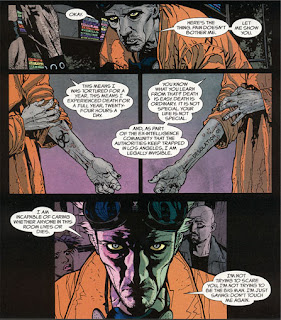 Desolation Jones is about a former British Agent who now lives in Los Angeles in a form of open-prison. He is legally invisible in LA and can do various odd-jobs but if he tries to leave the area he will be considered a rogue agent. Along with various other individuals who are labeled as such due to their odd abilities or past government work, Jones does what he can to get by. He's a sickly looking man but he hides a lot of power deep within him. Whatever the Desolation Program did to him that made it so he was the sole survivor definitely created many problems but also gave birth to someone quite dangerous.

Jones is hired by a man to find a missing reel of Adolph Hitler's pornography. I'm serious. Other former government agents--from the USA--have taken it from this man--and Jones is on the case. There is of course a lot more to the story and we touch upon Ellis' pet subjects like government conspiracies and the like. It's a somewhat interesting story but it feels all over the place with various digressions such as Jones learning about pornography. Again, I'm serious. These is a whole issue where he interviews someone who works for the men who stole the tape who are adult-film directors and she tells Jones all kinds of things about pornography and sex, the human condition, etc. It's almost a little reminiscent of the pervasive sexuality of Grant Morrison's, "The Filth," which is one of my favorite comics (I'm not alone in this, I talked with a fellow comic fan who felt the resemblance too)--but in, "The Filth," the idea of humanity's sexual desire being a primal urge that causes our downfalls is the point (arguably) whereas here I think Ellis just sort of went off on a tangent.
The thing that keeps all of this from becoming too stale or odd with its trailing off for various bits would have to be JH Williams III incredible art. With a mixture of a realistic painterly-style, abstract scratches, and panel break-downs that boggle the mind, it's just incredible.

In the start of one issue where Jones is flashing-back to how he first became as messed up as he is at the start of the program the art is this incredibly sickening shiny style with a dizzying surreal curve to all the art. We can feel Jones panic as things start to go wrong and he realizes he is in far over his head, and when he snaps back to reality in a cold room and the art style is the opposite with a harsh penciled look the shift is jarring intentionally and highly effective. There is another scene where Jones shoves someone into traffic and its gorgeously rendered with sparse color, black-and-white to show an absence of life, and a healthy dose of red for symbolizing blood. That's just two examples of many.

You don't realize how much of this comic is being carried by the art until you start up with issue #7 and find things don't seem as exciting or fun. Yes, Ellis is still doing his own clever thing with some new plot about a spy and science-fiction books but it still just doesn't seem to have that zing of the first six issues. Perhaps it's the mixture of violence, seriousness, sex, and absurdity that just don't quite mesh well together thematically but a reader could forgive this when looking at JH Williams III's art. Maybe its that Ellis was trying to do too much with his character of Jones and created an odd hodge-podge of interesting ideas that couldn't quite make for a fully fascinating story. It could be having loved so much of Ellis' work it makes sense there is something I think of as a bit off-kilter from his usual supreme output in terms of both quality and tone. Still, this is an interesting comic for all the ways it doesn't work as much the ways that it does. The last issue that came out ended with Jones remarking he wondered what death was like, if it was peaceful, and then passing out for a nap on a couch. It's a fittingly strange end for such an odd little series.