Intro
I'm back from Project Comic-Con after spending many hours of the day there! I had quite the fun time, meeting many nice creators, vendors, and other assorted folk.Yes, even little ol' me with my often sarcastic and cynical outlook had a really good time, probably the most fun I've had in awhile. Let's do a big overview of a chunk of the stuff I did and the interesting people I met--some with helpful images from the Project Comic-Con website to tell you more about them! This isn't in perfect order of how I did stuff, but it's pretty close. 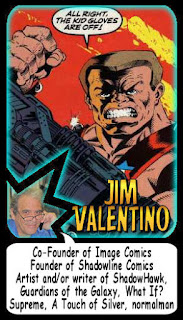 I arrived to Comic-Con at around 9:50 AM or so, and even though it didn't officially start until 10 AM everyone was already being let inside--so yah for not having to wait! Upon going in I spoke with the pleasant Jim Valentino. He is one of the founders of Image comics and the guy behind the brand within it, Shadowline. We and some other fans chatted about comics, he showed some upcoming Image stuff, and I complimented how with all the hubub about creator's right at the moment (you know, with the Before Watchmen business) Image has been getting a bit more attention for how it lets people have their own intellectual property and such. He said from the start they've been about creators rights, that's one of the reasons behind Image's founding and he believes in it. A cool guy. Here is the Shadowline Website. 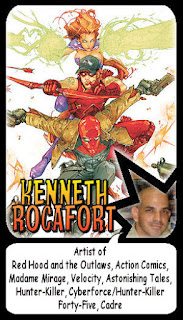 I stopped by the table of Kenneth Rocafort who some may know for his current artwork on, "Red Hood and the Outlaws." Yes, it did have some controversy at the start with the character Starfire and her behavior, but that was the writer, and regardless of that the book has and currently does look pretty darn good, with Rocafort's kinetic-action style of drawing. Plus, the guy couldn't be nicer. I told him how I enjoyed the way he drew Jason Todd and he said it was fun character to draw. Also, a young girl whom had drawn Iron Man with crayons was at his table and traded it with him for a very snazzy-looking drawing of X-23 he made for her. While the Iron Man drawing was cute, I think getting fully inked and colored drawing was a pretty sweet deal, showing how nice Rocafort is. Here is his site. 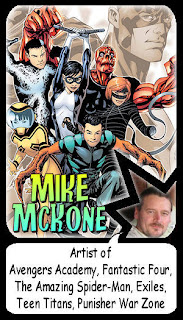 I spoke a bit with Micke Mckone,  whose work on Avengers Academy I've enjoyed, he was busy so we didn't talk too much, but he was nice just as everyone else was at the event. Here is his Facebook. 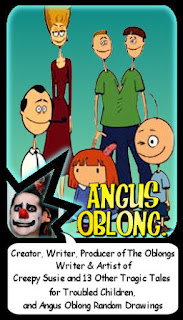 I also ran into a man who was probably one of the friendliest guys at the show, eager to hear about my blog and everything else I do. Plus he looks like a clown (literally) and made a great series known as the Oblongs. Yup, I ran into the famous (infamous?) Angus Oblong. I have proof I survived our encounter: 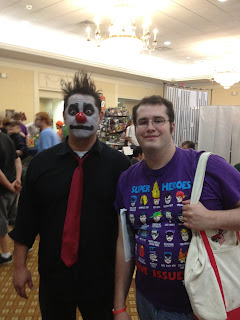 He was very funny and a joy to chat with. Anyone reading this who hasn't seen the Oblongs ought to, it is both depressing and funny. Depressing because if you think about it the main plot is that of social disparities between wealthy people at the top of the hill and deformed poor people at the bottom. Funny because Oblong has a twisted sense of humor that takes that premise and makes absurdly hilarious situations out of it. Here is a link to his site. 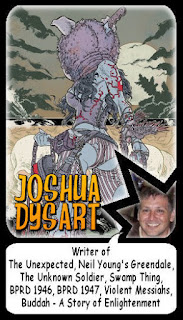 I also spoke with Joshua Dysart, who has done a lot of stuff, but I've most enjoyed his run on Unknown Soldier for Vertigo. It's worth checking out. It discusses the conflict in the Sudan in a way that is both tasteful while still making fora great story. His website is here. 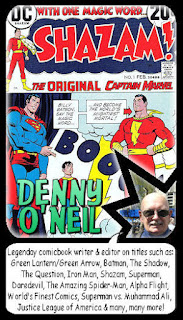 I of course talked to the famous Denny O'Neil. I told him how much I loved his work on The Question--which he told me was one of the favorite things he wrote! His wife was with him too and she was very sweet. I went to a panel where he spoke about comics, and his thoughts about how continuity can useful when used logically but can't weigh you down ring especially true as writers try to explain everything and take every past event in a heroes life into account instead of just having fun with a tale. As of now I couldn't find an official website for him to share, but I do have this picture of us: 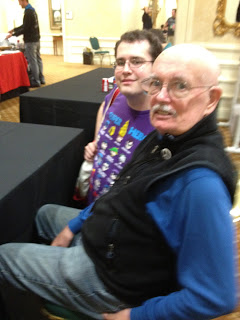 His wife was nice enough to snap it, the reason he has that look on his face is not because I am suddenly just popping up behind him and snapping a pic, but we were having issues getting my phone to take the picture and he was worried if it would work. On picture three it did! 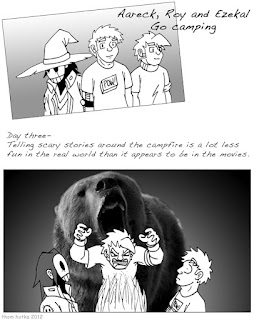 Also in the morning I met the creators of the webcomic Nextuus and plan to check it out as they told me it is sci-fi and I do enjoy that topic. Here is a link. I had a lot of fun talking with Steve Lightle. I talked with him about his past Doom Patrol work and how to make comic characters interesting without making them seem too "different". We also talked about how characters get relaunched in ways that aren't always familiar and how that can work out well and not so well. He was working on a sketch for someone and they came by to see how it was going and I think they were a bit dismayed I had been taking up so much of Steve's time talking to him for quite awhile about comics! 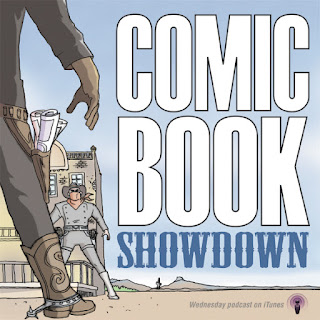 On my way to meet Cullen Bunn I met one of the individuals behind the Comic Book Showdown. I tried Podcasting on my blog some time ago but it just didn't seem to be getting many listeners and all that editing and recording can take a bit of time, so I admire anyone who puts in all that work. Why not give them a listen? Just follow this link. 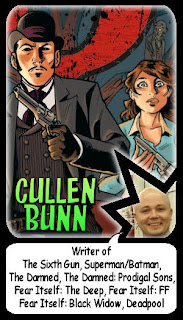 I then met Cullen Bunn and he was a fun guy. We chatted a bit about his new work on Wolverine, and I told him I had heard lots of great stuff about The Sixth Gun and had been meaning to check it out. He's also going to be writing Venom soon, so he's doing all kinds of new projects for people to start reading. He can be found online here. 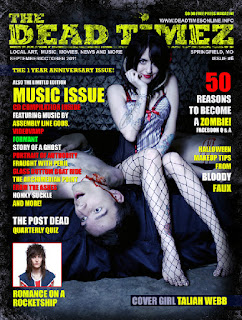 Readers of the blog know I am a fan of alt-culture magazines, and at the convention I met Caesar Crawford, the owner/creator of The Dead Timez. He was fun to talk to; we discussed tattoos and how while I think they can look neat I am terrified of getting that many needles repeatedly shot into me (so yeah, I'm never getting one). It's a magazine about, "Local & Independent Art, Music, Film, and Entertainment." I picked up two back-issues and look forward to checking them out! Here is a link to them. 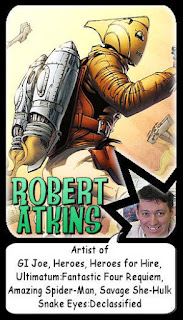 I met Robert Atkins and we discussed how I enjoyed his work on Heroes For Hire. He is doing a neat thing where he makes a sketch a day for all 366 days this year. I told him with it being a leap year he should have taken a day off and just done 365, but the man is dedicated. Here is his site where you can see all those sketches and more. 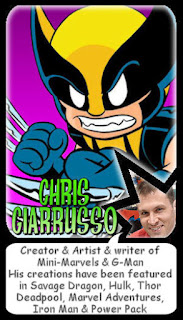 I met the creator of those Mini-Marvels comics I love and the popular G-Man series, Chris Giarrusso. He was kind enough to give me his card which he joked can be used as a bookmark. You can find his stuff here. 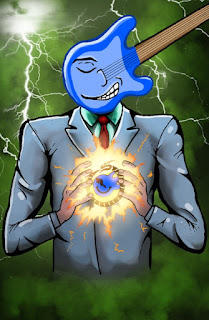 I met some guys behind an independent comic, I've got the first issue and the next one will be the 99th. You heard me. In a clever twist the first issue tells how the main character was born and the next will be about his death. That's a fun idea, and the comic is pretty wacky fun from what I've flipped through so far. You can learn more about them here. 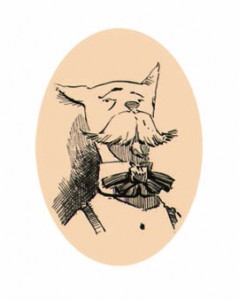 I met the creators of  the webcomic Camden Bottoms. The art style for it is very snazzy and worth a look. Here is the link. 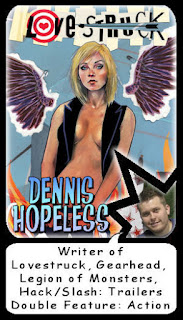 I stopped by the table of Dennis Hopeless and told him how I enjoyed Legion of Monsters, which he thanked me for. Link, here, you know the drill. 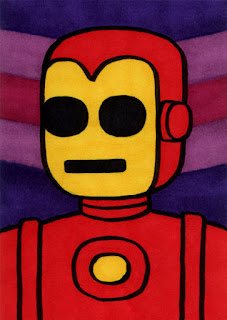 I met a neat artist with a cool style named Neil Fitzpatrick. The characters are adorable and the huge black eyes are both cute and creepy (in a good way). Find more of him here. 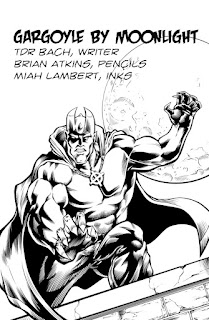 There was a table with a writer and artist who have a comic about a Gargoyle by Moonlight. It looked fun and the whole issue was a big self-contained tale. They gave me a link but when I go to it it currently says it is under construction. That may change soon. Here it is.

I also met a webcomicker behind Frik'In Hell. A tale of a medieval warrior who works in Fast Food. It's a comedy comic. Here is a link to the first episode.

The Day Ends
As the convention started to close up at 6:00 PM I put the bits of stuff I bought in my car and went back for the after-party. I was tired and needed to get a late dinner so I didn't stay too long. I had a really fun day and plan to be there again tomorrow. I will be getting there a bit later because lord knows I need some sleep after all the stuff I did today! As always, we owe thanks to the 2 guys behind this, Steve of the great Newcastle Comics and Jeff.