This Is One Of Those Rare Occasions, I'm Going To Be Serious

If the post title, and inside-header didn't tip you off, this is one of those occasional posts where I look inside, use my brain, and get serious. I wrote this a bit ago, edited it off and on, and thought the end of Black History Month was a good time to put it up. Thoughts are either my own or those of the author's I discuss and may be a bit controversial--although I don't really say anything that touchy, the men I'm quoting don't hesitate to do so.

Today I'm going to examine the portrayal of male black sexuality and the intricacies that entails as expressed through the non-fictional and somewhat autobiographical, "Hung: A Meditation on The Measure Of Black Men In America," by Scott Poulson-Bryant and the satricial comic, "Gangsta Rap Posse #2," by Benjamin Marra. 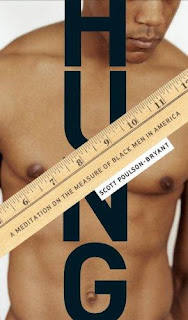 I discovered, "Hung," through an excerpt which was printed in an issue of Vibe magazine before it went defunct (and then came back). It makes sense they put in an excerpt as he was one of the founding editors--I would hope the pay him some courtesy. I discovered the, "GRP," through the internet when various people discussed it, from internet site Robot 6 giving a mention to it being released, or Tucker Stone doing one of his humorous review segments and talking about it on The Factual Opinion. However, it wasn't until I read Sean T. Collin's review of the comic on The Comics Journal that I got really interested. You see, Mr. Collins posted an extremely interesting review discussing how the comic is so over-the-top of everyone. How? Well, with almost all the white people being racist, the gangsta rap posse being drug-doing, white-women-fucking, people-shooting tough-guys, and of course their manager as a Jewish fellow because this is a surreal comic with everything cranked up to 11 in terms of absurdity. The thing is, it really focuses in on the whole black-male sexuality. The white women all want that black male penis, and the black men definitely want to have sex with all the white women. It's like if an interracial porno came to life in terms of how the characters think. 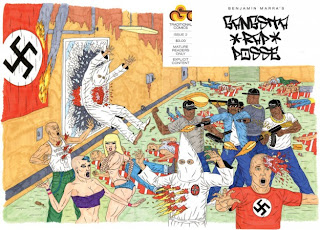 This made me think of another book I read discussing black men, and how their sexuality has been viewed by the world, i.e. "Hung," and you know I had to get me a copy of, "GRP #2," to read and then compare and contrast what I found. The interesting thing is that there is a treasure-trove of things to discuss just as I anticipated. You see, Scott Poulson-Byrant talks about how you always hear, "Big black cock," but would never hear, "Big white cock," or, "Big Asian cock." Guess what the women say they want in, "GRP #2?" Indeed. Poulson-Bryant says in his book that in his mind, making the black man subpar to the white man in every way back in the days of slavery except in physical strength and sexual virility gave them an excuse to treat the black man as a hyper-sexual child. Something that was a wild animal unable to control its wild lust. It had a big penis, of course, because it was built for nothing but physical labor and fucking! You see, Poulson-Bryant says in his book the title itself is both a dirty joke and a dark statement. The joke is that black men are supposedly more endowed, or, "hung," than other races, but at the same time this same supposed gift is the very thing that resulted in them being viewed as a threat and lynched--hung, as it were.
In Gangsta Rap Posse the men aren't thought of as mindless beasts, they just are hyper-sexual, hyper-violent, big on drugs, and fans of white women. In, "GRP#2," I didn't see a single black woman have relations with the gentlemen, but plenty of white females pleasured them in various ways. This is satire, it's so obvious from the way the GRP behaves, to the fact their manager is Jewish, how all the white women just want that big black cock...one thing bugs me though. Some people actually would think this. You can go online and there are people who think of black men as nothing more than white-women-lusting, drug-doing, violent beasts. There are people who say it is all Jews who help get rap music out there (look online at the hate sites, I have and it made me feel ill). There really are people who are convinced that if white women get a taste of that black penis (no pun intended) they will truly, "Never go back," and somehow the purity of the white race will be diluted or some twisted reasoning. There is a strange alternate world that exists in some people's minds where this comic is pretty much accurate.

If we could go back to the pornography aspect, in the book, "Hung," Poulson-Bryant talks about how there is so much interracial pornography, and by that it isn't white men having sex with black women (not a big genre in porn). No, it is black men with white women. Fun fact:  A fair amount of women in pornography won't have sex with black men--at least on camera--as that can put them in a different sort of category than other performers, as if it makes them less desirable than other porn-actresses for the, "mainstream," porn films, with their being relegated to the genre of interracial. Another fun fact:  The majority of consumers of this pornography of black men with white women are white males. What is a majority? The number varies from under 50% when put with other wide demographics to Poulson-Bryant's claim of 3/4. So, we have the black men who supposedly are lusting after the white women, yet all these white guys want to watch the, "big black cock," they fear so much penetrating the white women they so desperately want to protect the innocence of. It's as if in the process of hating something it becomes a sort of fetish. Guess what? Gangsta Rap Posse touches on this in a silly way too. 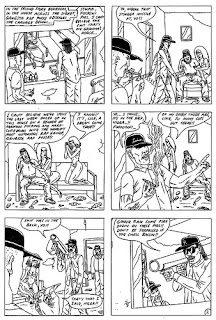 You see, the mayor of the city wants them dead because they had sex with his wife, filmed it, and sold the video. However, the mayor may want them dead, but at the end of the comic, guess who is watching the video, masturbating furiously to the image of his wife being gang-banged by four black men? Yup, the mayor. He hates that black cock, he wants it destroyed, but it also turns him on so much in a weird fetishistic way to see it on his wife--the wife who no longer wants to be with him because after being with the GRP, "All she wants are those big black cocks...they took away my manhood!" This is all for laughs, as this is a silly comedy comic, but as Poulson-Bryant clearly points out, this comic inadvertently touches on some complex race-relation issues through what is supposedly just a simple gag of the mayor touching himself.

I'd like to discuss one more thing, though I can't really be as much in-depth as it isn't really covered in both texts, just one. You see, Scott Poulson-Bryant in, "Hung," readily admits to being attracted to both men and women, and having had sex with both. In "GRP #2," the boys don't hesitate to call people, "faggot," as an insult. As anyone who knows anything about popular culture is aware, the most masculine thing in the world is to be straight and have sex with women, being gay is non-masculine supposedly. It supposedly threatens the straight male so much we get the homophobia of straight people being afraid their children will be "turned" somehow. You see where I'm going? You have the white men who fear the white women having sex with the black male, and yet you also have this straight-panic about anything gay. Arguably, in black culture there is a much stronger homophobia than even white culture, but that would be its own essay and I just wanted to point out an interesting parallel to consider as a bit of a closing, "Hey, by the way." Of course, to say rap music in general can be homophobic would be an understatement.
Clearly, views of the black male as some sort of hyper-sexual being unable to control his urges continue to persist, Scott Poulson-Bryant chronicles it from the past to present, an even when Benjamin Marra plays the idea for laughs in, "Gangsta Rap Posse #2," there is a tinge of sadness when one has the knowledge that a fair amount of people still think in a way shown to be clearly absurd. The white neo-Nazis the GRP shoot-up at one point in the comic (the one potentially "heroic" thing the GRP does) may very well be the heroes of the book to some people who were to read the comic and not grasp that it is satire, but think it is all being played straight and that, yeah, black men sure do have drug-habits and love trying to fuck our white women. In, "Hung," we read of a world where the white man possibly secretly both fears and has a fetishistic view toward black male sexuality, thinking that black men just might have bigger penises, and want our white women, and even though we hate it we want to watch. Meanwhile in, "GRP #2," we see a world where its no secret, but in the world of the Gangsta Rap Posse with the stereotypes being true, everyone is arguably to blame for their behavior--from the racist white men to the outlandish black men.

The question is, who's to blame in the real world for such views persisting despite the best efforts of people to dispel them?

Seriously, who? I wish I knew.
Posted by David Charles Bitterbaum at 5:02 PM