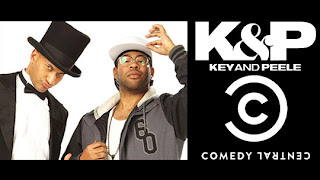 Comedy Central has introduced a new show titled, "Key and Peele" which just ran its 2nd episode last Tuesday night after Tosh.0, Comedy Central's current big-ticket show. I find this show to have some bits of pure genius but also at times be a bit dull. Also, as the hosts are two men of color (Keegan Micheal Key and Jordan Peele are both biracial), and the show is on comedy central in an AD--or After Dave (Chappelle)--era,  comparison's to one of Comedy Central's biggest shows ever, Chappelle's show are inevitable. That isn't quite fair though, because even though the show has some similarities to Dave's show, this is its own beast. First, let's deal with that elephant in the room though.

The similarities to Chappelle's show and Key and Peele are ones that really could be said about a variety of shows. This show is sketch comedy, has stand-up bits, and features a good amount of racial humor. Chappelle's show did do that, but so do countless other programs. Unfortunately, Key and Peele will suffer comparisons (Numerous headlines on the web have asked if they can fill the Chappelle's show void or take its place, etc.) due to being on Comedy Central. Other than at the end when I'm going to compare it to Chappelle in more of a tonal way, this review is dropping any Chappelle reference as of now (even though it was an incredible show).
Key and Pelle often will find a single thing to make a punchline of and harp on it until the end of the sketch. This can work well such as a sketch where two soul-singer men who are heart-throbs to the ladies happen to have one member trying to confess his love for the other in song on stage, but it can also backfire such as in a painfully dull sketch where Key and Peele play two women who keep snapping photos and then deleting them due to thinking they look shoddy (even with the twist it still lacks much humor). A skit where two mousy men say, "Bitch," quietly can be grating--we get it, they fear their wives--but the now-viral clip of President Obama having his anger-interpreter Luther shouting things for him can be quite fun.

This back-and-forth nature of good and bad would make for a just somewhat above-average show were it not for the sudden burst of brilliance that sometimes erupts making the show give a hint that we could have something really special lurking beneath the mediocre-to-pretty funny. A bit where a newscaster freaks out on a helicopter isn't that funny, until we learn it is actually about to crash making all of his fears now valid, and the below embedded bit is just amazing. Watch this all the way through, because while it may start out a bit silly it gets so great:

This is where I will bring in the Chappelle's show comparison. Why? Because while watching this clip, I felt some of that feeling I got from the best bits on Chappelle's show. That dark, twisted humor. You know, pitch-black in tone and very angry. It starts out with a character fulfilling all sorts of racial stereotypes but then he actually breaks out of the mold, shows vulnerability and reveals he isn't some cliche, and does this only to be rewarded with a twist I genuinely did not see coming in the bit.

Chappelle's show would show us a stereotype, say, "Is this what you want, America? Someone living up to your cliches?" and then shock you by actually doing something clever with centuries of our hideous racism and assumptions about people. Key and Peele does that in this bit. Someone stops living up to the stereotype he is expected to be, but the result in only being belittled by the doctor. He tried to be a real person, and is crushed for it. Welcome to American society, it is a cold place. This bit of just over three minutes is so amazing, so clever, so funny, and in some ways so heartbreaking, I can't help but be planning to tune in to Key and Peele again tonight on Comedy Central at 10:30 PM Eastern Time, 9:30 PM Central.

Key and Peele has a bit of a ways to go before it is a truly great show, right now its just a good one. However, with hints of incredible genius I think something beautiful could form if this is given enough time to develop. Time will tell if this is given a chance or Comedy Central decides to ax it as has been done to many shows that don't immediately perform outstandingly well on the network.
4 out of 5 stars.
Posted by David Charles Bitterbaum at 11:45 AM