"Fantasy Sports Number 1" is Pure Fun From Start to Finish! 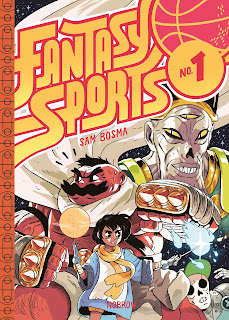 As readers of the blog are aware, I've been a big fan of Tucker Stone and his writings/podcastings/etc. on popular culture and comic-books. He of course got a job with Nobrow and now chats with press folk like me as part of that job. Having spoken with him before and knowing he reads the blog now and then he has a pretty good idea what kind of comics I like. Therefore, when I got a copy of "Fantasy Sports Number 1" from him at the start of this week in the mail and it included a note where he said how he thought I would like the comic, I knew I needed to read it right away.

That is why despite having a stack of books, comics, and magazines I need to read that is literally as high as my waist, I put all those aside and delved into this book written and illustrated by Sam Bosma the same day it arrived at my doorstep. So, I'll just admit Tucker Stone knows me pretty well because I absolutely loved this book thanks to its gorgeous art and being really weird--but my kind of weird! Plus, it's mostly kid-friendly but appeals to a grown-up like me, that's another great aspect of this book! Still, you may be asking just what the book is actually about. Well....

What this Book is About 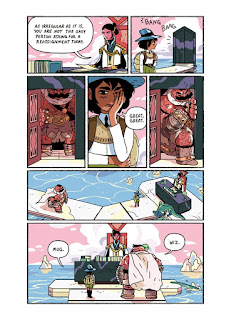 The title of the book actually describes things very well. This is a strange tome that takes a magical fantasy world and then throws sports into the mix. You see, a young girl known as Wiz-Kid--who also happens to be a wizard--is forced to work with a well-meaning but rageaholic dullard named Mug for a Mages Guild to acquire ancient magical artifacts. This results in them on one excursion eventually coming face-to-face with He of the Giant Steps--or just, "Steps," for short--an old Mummy that must be faced in combat to determine if our adventurers get the treasure or not. The form of combat he chooses? A basketball game. Yeah, you read that right.

Clearly from my description you can tell this is an incredibly quirky book, having a surreal world of magic co-existing with the classic pastime of basketball and coming together in a delightful way. Now, while the idea is clearly off-the-wall in a good way, it helps that writer-artist Sam Bosma also illustrates everything in a way that is delightful. With a look that the promotional material for the book itself describes as being reminiscent of, "1960's Manga," there is a feeling of a manga influence on this, but not so much as you feel like it ought to read right-to-left as manga does. It just is more of a manga flavor, with me really in fact getting the vibe of if a classic kid's movie like, "The Goonies," or, "E.T." suddenly was transferred into comic form with all the wonderment and excitement those films inspired (and the book discusses how another 80's classic, "Raiders of the Lost Ark," served as inspiration too). 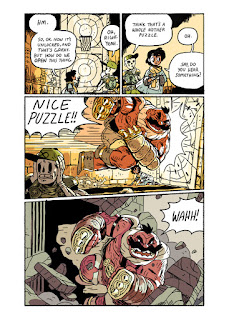 You may have noted that both the movies I mentioned are from the 1980's, and that is because the book gives me that 80's vibe with its mixture of bombast, frenetic action, and sheer excitement that kid's movies feel like they used to have before turning into either excuses for product placement or the latest young-adult dystopian future-world novel made into a flick.

As a book that is friendly to younger readers other than a rude hand gesture and being violent at times (although most kids nowadays are so desensitized to all that it's a non-issue) this is something you could both read to your kids, or share with a fellow grown-up friend who likes comics. If a child reads this they'll enjoy the action, humor, and pep each page carries. Should an adult read this, they'll enjoy all that too but also probably get those nice warm waves of nostalgia I got when this made me reminiscence about my beloved classic movies and comics.
In conclusion "Fantasy Sports Number 1" really is pure fun from start to finish and a book I can wholeheartedly recommend to you, your kid, or anyone who enjoys comics. I'm not even a big sports fan necessarily and I loved how it incorporated that element into the story--that tells you all you need to know! So yeah, check this out, it's really, really awesome. My thanks to Nobrow and Tucker Stone for sending me such a great book to review!
5 out of 5 stars.

Note: As mentioned, a copy of this book was provided for the purpose of review.
Posted by David Charles Bitterbaum at 2:52 PM