2015 in Review--Ongoing Series of the Year

The Going-Ons with Ongoings
There are comics that technically aren't supposed to end. The thing is, almost all of them do. That said, comics which were solicited as being theoretically unlimited in issues deserve awards too! That's why I'm honoring one ongoing that it was suddenly revealed will end with its upcoming 12th issue, one comic that launched, ended, and re-launched with a new first issue in the same year, and another title that is just damn good. 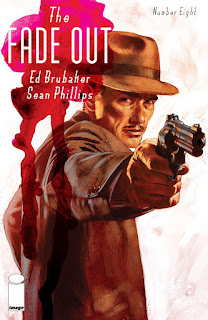 There are many great duos out there. OutKast, The Russo Brothers, PB&J, and so forth. Comic books have stellar teams too, just look at Kieron Gillen and Jamie McKelvie. One team who consistently put out great stuff however would be the two guys known as Ed Brubaker and Sean Philips. They both do great work on their own, but the immense body of work put out by them working in unison illustrates mind-boggling creativity and craft. Their immense talent resulted in this fascinating exploration of 1940's Hollywood and the dirty, dark secrets the supposedly happy and shiny era had.

I was surprised when it was suddenly revealed the comic would end with issue #12, which Brubaker said in the comic's back-matter he and Philips had planned for, but I was always under the impression this comic could just go on and on with fascinating mysteries, drama, and all that good stuff. That final issue is due in early January and I am both excited to read it and sad for the series to end. The fact it was solicited as ongoing is why I'm putting it in this category, and should you love movies, crime comics, or just general amazing writing and artwork you definitely ought to check this series out. 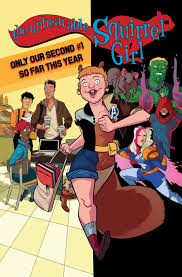 This comic actually launched, was great, and then due to, "Secret Wars," had to re-launch with a new #1 but in actuality just continue from where it began (and cleverly acknowledge but not tie-in too much with other comics Squirrel Girl appears in). The secret to this comic being so great is that it genuinely seems to have an affection for its main character, be it how writer Ryan North shows her as a chipper and smart problem-solver, or the way artist Erica Henderson draws Squirrel Girl in a way that actually looks normal and human (as opposed to impossibly curvy/the female super-hero cliché).

The way North and Henderson balance-out the everyday life of Doreen Green (her actual name) with the super-hero aspects results in a comic that is half, "Slice-of-life in the day of a college student," and half, "Lighthearted and fun heroics!" There is also the ingenious way that the creators acknowledge Squirrel Girl's uncanny ability to beat supposedly world-ending threats, and cleverly twists that concept so that she actually does conquer Galactus or Dr. Doom in a reasonable way. Oh, did I mention the comic is hilarious and fun? I did? Well, it is, and it is without a doubt one of my favorite ongoing series of the year. 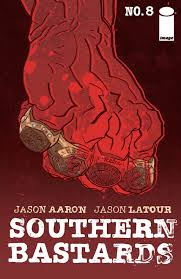 I already discussed how Jason Aaron was my runner-up for writer of the year based just on, "Southern Bastards," alone, and that should tell you a lot about how good this comic is. Whether it is the mixture of love and disgust held by the creators for the South, the careful plotting building its way to what I imagine will be an epic climax of the town turning on the evil man terrifying them, or just the stellar artwork by Jason Latour, this is a superb series. Plus, the letter-pages often have tasty recipes for assorted Southern dishes!

The manner in which Aaron has injected so much dark humor, brutal violence, and heart into this title is wonderful, and with Latour's masterful artwork this has been an amazing book. No other comic takes everything good and bad about the South the way, "Southern Bastards," does, and boy am I eager to see where it goes in 2016.
Posted by David Charles Bitterbaum at 10:18 PM