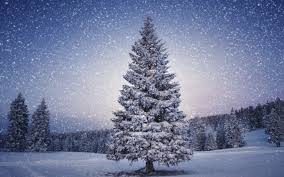 It's Christmas so let's unwrap some goodies and talk about how I recently received in the mail my December 2015 Geek Fuel box as a part of my subscription and the December 2015 Box of Dread which I was sent for the purposes of review. You may recall I quite liked the last Geek Fuel box, but then reviewed some other mediocre sub boxes. Well, I'm pleased to say these two most recent boxes are without a doubt winners in my humble opinion.

The December 2015 Box of Dread had an assortment of exciting items that I feel fit the horror and sci-fi theme. Box of Dread is a subscription box that comes from the website Dread Central and the box will sometimes tie-in with the movies and such covered by the website.  This month had some bigger and smaller fun items such as: 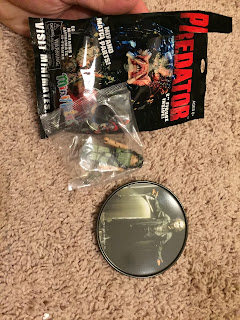 This, "Predator," Minimate and a coaster that ties-in with, "The Crow," were both cool. The coaster could vary by person however as some folk got other movies or even, "Space Invaders," themed coasters. I was hoping for one of the Predators to be in my Minimate bag, but of course it is totally random so I don't hold it against the Box of Dread folk that I got a human character. 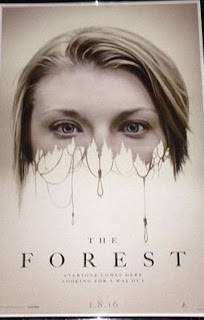 I received this poster for, "The Forest," movie. From the trailers I've seen for this it looks pretty bad, and if we're being honest PG-13 horror movies tend to not impress (with a few exceptions). Still, it is not an awful poster even if the movie looks to be uninspiring. 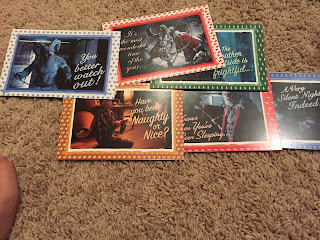 These postcards for, "A Christmas Horror Story," were just the right blend of scary and gross with humorous and silly for me to like them. I haven't seen the movie but if it has the same mixture of funny and gruesome it might be worth checking out.

There was a cool big plastic card that has the code for 4 songs from some assorted music artists. I haven't heard of these individuals but think it may be more rock-focused which would explain my ignorance (I don't do too much rock or heavy-metal). Still, that's a pretty good gift and I look forward to trying out the jams! 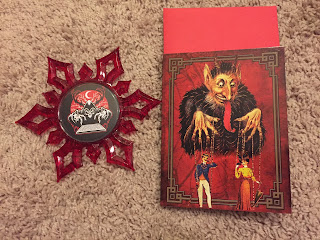 Here is an ornament that advertises Dread Central and a nice Christmas card and envelope with what appears to be good ol' Krampus. I'm impressed by the heft of the ornament and how it is plastic but has a nice look almost like those fancy glass ornaments. The Krampus card is fun too! 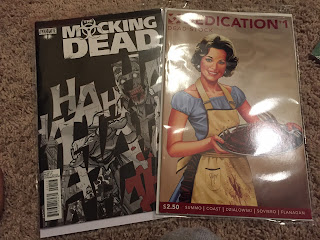 There were two comics, with all subscribers getting the same 1st issue of, "The Mocking Dead," which is a parody of sorts of, "The Walking Dead," written by the talented Fred Van Lente, and the other comic could be a variety of the 1st issues of the Double Take, "Night of the Living Dead," comics. I of course was not a fan at all of the Double Take comics so getting this was one of the only things I found myself less-than-enthused about besides the poster. Still, the other comic is fun so that makes me happy. 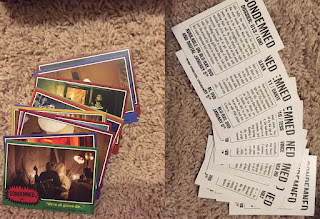 Lastly, there were some trading cards for a movie called, "Condemned," that from what I could find online is a horror film involving a virus that makes people turn into crazy killers (and this virus forms in an old condemned building full of people living squatting in the place, hence the name). Could be good, could be awful, but I was impressed by the detailed information on the cards.

In conclusion other than one comic being lame and the poster advertising a movie I have no desire to see I was greatly impressed by this month's, "Box of Dread." It has a good representation of smaller horror films, bigger flicks, sci-fi that has a horror-bent, and the free music is a nice touch too. Plus, I'm a sucker for postcards, so I really liked those. Overall I would say this was a stellar box, and rate it...
4.5 out of 5 stars.
You can learn more about Box of Dread at this link.
The December 2015 Box of Dread was provided for the purposes of review. 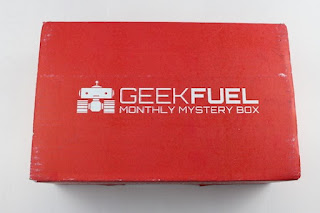 This month the folks at Geek Fuel really went all-out and turned in some stellar stuff. Note that some of the pictures I have of the items that came in this month's Geek Fuel are from this article on My Subscription Addiction as they generally take much better photos than me.

First off we had an adorable holiday greeting card that ties-in Geek Fuel with, "Star Wars," with that series playing a significant role in this month's box. 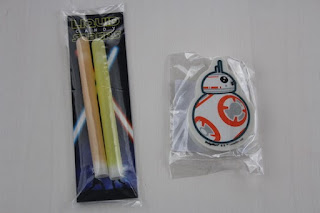 There was also a big eraser shaped like BB-8 and some candy sabers. 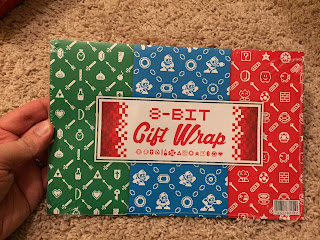 Seeing as how it's the holiday season it makes sense they would include some 8-Bit gift-wrap for all your presents to look awesome! 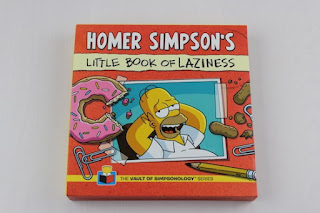 Subscribers to Geek Fuel could get either a Homer Simpson book or a Bart Simpson book. I got the Homer-themed one and was impressed by its heft and the cool way it is not just a book, but has little files and fake post-it notes you can take out and move around. 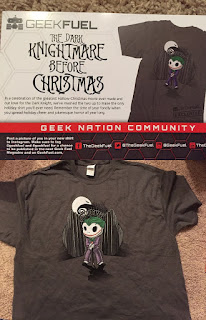 The shirt this month was a clever mash-up of, "The Nightmare Before Christmas," and the Joker AKA Batman's biggest nemesis. Pretty snazzy! 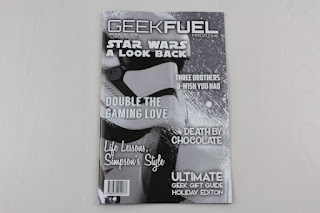 The usual Geek Fuel magazine came too--I told you, "Star Wars," was a big aspect of this month! 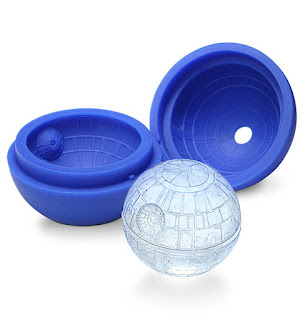 One other item related to the war in the stars, a plastic mold of the Death Star that can make a big ol' ice cube that will surely intimidate any Rebels! 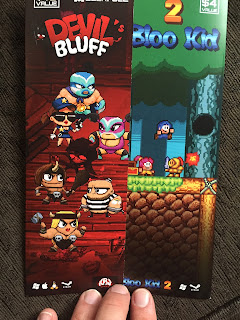 Finally this month two games came with my box! The, "Devil's Bluff," one looks especially interesting, but this, "Bloo Kid," doesn't look too shabby either. I'm pleasantly surprised to get a duo of fun!

Geek Fuel generally doesn't have a theme, which I actually like as that way it is just an assortment of cool stuff, but this month there was a slight motif of, "Star Wars," items. Between those and some other great stuff (like two games!) I would say this is a delightful month of Geek Fuel goodies and would rate it as a very-pleased...
4.5 out of 5 stars.
Learn more about Geek Fuel at this link. 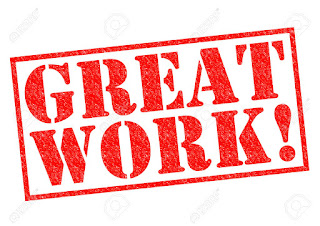 These were some fantastic boxes and I am very happy to have received them. The Box of Dread supplied some great horror-themed items and Geek Fuel continued to impress with their assortment of cool things. I hope everyone has a merry Christmas and I will see you back here tomorrow for my 2015 in Review posts!
Posted by David Charles Bitterbaum at 2:00 PM