There were a lot of great games that came out in 2015, and many of them I still fully intend to play but just haven't had the chance to do so. Whether, "Lego Dimensons," "Life is Strange," or, "Fallout 4" there was some superb stuff I really want to try out. That said, I can say what my favorite game of 2015 was that I was able to put some time into... 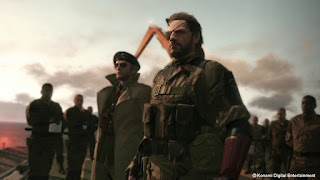 Putting aside how the story was pretty weak compared to previous entries, this was an amazing game and the best swan song for Hideo Kojami's time with Konami anyone could have hoped for--and now that he is free of them I look forward to what he makes in the future. My early impressions of MGSV were quite positive, and after having dedicated even more time to the game, I can conclude it is indeed just flat-out amazing other than some complaints here or there (but nothing's perfect).

The sheer variety of ways to tackle a mission, deck-out your character, comrades to kick-it with, and your very own base to tweak results in something that is as fun as it is full of depth. That the gameplay is just so incredible helps make-up for the strange misfire that the story can at times feel like. This is just an utterly amazing title, and hearing how Konami may have cut features to save money only makes one wonder if this title could have even gotten any better. Regardless of those, "What-ifs," however, this is still my favorite game of 2015...that I was able to play.
Posted by David Charles Bitterbaum at 8:04 PM