2015 In Review--Weirdest Comic of the Year 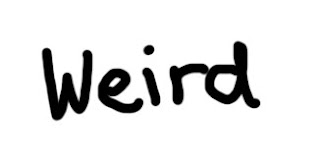 There are always comics that go beyond being a little different and enter the realm of outright weird. This year one comic handily took that title and another comic was a bit too new for me to fully qualify, but easily is a runner-up. 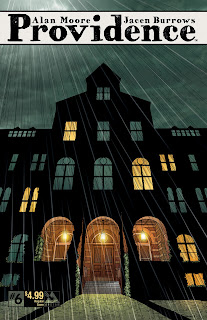 This series has had six issues come out, and despite starting out a tad slowly (or maybe because it started slow), it has over time grown increasingly dark and twisted, with issue #6 taking things to a whole 'nother level of terrifying, bizarre, and just plain weird. Between the slipping grasp on reality held by the main character named Robert Black, otherworldly entities influencing people in horrific ways, and all sorts of surreal nastiness, this is an abnormal kind of comic for sure.

Some people have protested that Alan Moore is over-the-hill but I think he still has some solid stories in him, as evidenced by the madness on tap in this series. The clever way Moore works-in characters from throughout the bibliography of HP Lovecraft is crafty, and it is ingenious how Moore puts elements into the story of things that would have upset/disgusted Lovecraft (namely that Robert Black is both secretly gay and secretly Jewish) and makes the prejudices of Lovecraft's era--reflected in Lovecraft's own writings--an intriguing part of the story itself.  Moore deserves immense credit for that smart way of using Lovecraft's own fears, "against him," as it were.
At this mid-way point in the series it has become harder than ever to tell what is real in our character's world, and what is his imagination/an evil force influencing him. It is scary, uncomfortable, and of course very, very weird. This is why, "Providence," is my weirdest comic of the year. 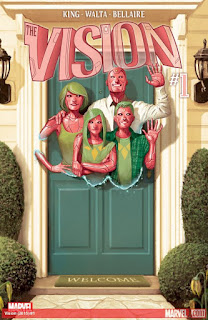 Only two issues have come out so far of, "The Vision," but they have been superbly twisted and strange enough to really make an impact on me. Putting the concept of the main character, The Vision, being a synthetic human struggling to be, "Normal," to the forefront, this comic follows The Vision and a family he has created of a wife and two children. Without the narration the comic would be a tad uncomfortable, but thanks to the third-person narrative boxes discussing how all these characters The Vision and his family meet will soon die due to the actions of The Vision and his family the comic ramps-up its ominous tone to the stratosphere.

The weird disconnect between these robotic beings struggling to understand humans while not having emotions (or do they?) makes for some fascinating reading. This series is still too new in my opinion to be declared the weirdest comic of the year, but it certainly has struck me as odd enough between its subject matter and discomforting narration to be considered the runner-up.

Wacky Stuff!
There are always comics that can be a little different, but sometimes you just want to enjoy something really weird. These two comics fit that bill in my opinion and I encourage you to read them and see if you agree with me.
Posted by David Charles Bitterbaum at 6:45 PM