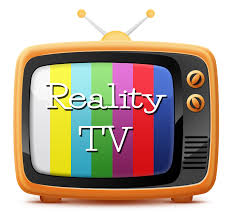 Last year I talked about how reality television on TLC was a guilty pleasure of mine. Well, this year I branched out a bit and enjoyed reality shows on other channels too. The thing is, my three favorites all were one type of show and shared a theme, somewhat.

"90 Day Fiancé," "Married at First Sight," and, "Marriage Boot Camp: Reality Stars," all involve people either in the process of getting married, getting married to a stranger, or dealing with a horrifically broken marriage. I've discussed a previous season of, "Married at First Sight," and the new one has kicked-off recently. "90 Day Fiancé," just finished its season, and we also have what looks like might be the most epic, "Marriage Boot Camp," ever just started in the last few weeks of December (with the previous season bleeding into 2015 too) featuring among the cast none other than Mama June and Sugar Bear--apparently trying to work things out now that the, "Honey Boo Boo," money ain't flowing in anymore.

All these shows are of course different in how they tackle the theme of marriage, but the uniting factor is how it basically takes the symbolic idea of marriage as this kind of happy perfection and points out, "Hey, it ain't always flawless!" Whether it is strangers who volunteer to get married and then have to live with the consequences on, "Married at First Sight," where the metaphor of marrying a stranger can apply to a number of people, or couples with geographic and cultural differences trying to work through it on, "90 Day Fiancé," there is something oddly satisfying at seeing the myth of an easy marriage exposed as being a mere fantasy--real marriage takes work.
Nowhere else is the evidence of what happens when you don't work at your marriage more abundant than on, "Marriage Boot Camp: Reality Stars," where various couples who either came together because of reality television (those, "The Bachelor," shows), or two folk who happened to be on reality television, find out that just because they can try to portray one image on television that never means the marriage is that way too. There are the couples who are loud and scream and argue in front of everyone, but then there are those who try to act perfect and happy but are actually maybe the most dysfunctional--just like real-life!

Some people dislike these shows and say they make a mockery of marriage, etc. etc. My thoughts are there are plenty of people who made marriage look bad with their actions long before reality television (I love when someone whines about, "The sanctity," of marriage and is on their fourth wife), so if anything these shows portray marriage as the complex creature it is, warts and all. There is beauty and difficulty when two people get married, these reality television shows just help make that quite evident. That is why marriage-themed reality television was my favorite kind of T.V. this year.
Posted by David Charles Bitterbaum at 3:47 PM