His Cause is Just, for the 3rd Time in a Row (Or Some Kind of Lame Pun Like That) 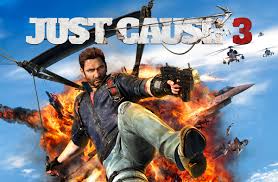 I tried out, "Just Cause 3" for a few hours. I had a Redbox game-rental credit and a bit of time to spare, so I gave it a shot. I have some varied thoughts that don't really make a cohesive blog post so much as form an assortment of opinions/read like the ramblings of a madman. Let's share some.

Thoughts
Your main character's name is Rico, I can't recall the name of anyone else. The plot is terrible and doesn't know if it wants to be serious sometimes or always off-the-wall silly. Just ignore the horrendous excuse for a story, it doesn't really matter. I mean, you need to play the story to get some cool things unlocked, but don't actually bother listening to the plot. Go make a snack instead.

The overall graphics in the game are fine, but my word the explosions are beautiful. The effects of all the things that can be destroyed getting destroyed are gorgeous. From fuel tanks exploding to helicopters turning into flaming comets of doom, everything just looks so good when it catches fire. 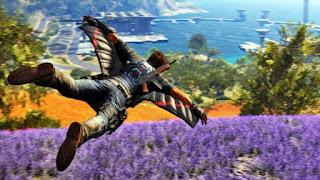 Oh my God, the wingsuit makes things so wild. In the previous games you could get up to some shenanigans with your grappling hook and parachute, but now with the added wingsuit you can get to the point where you barely ever have to let your feet touch the ground. It truly is majestic to rig a tower to explode, jump off it, and glide away whilst you trigger the C4 and watch the buildings crumble.

On the the subject of buildings crumbling, it is kind of funny and odd that when it is something that is owned by the evil dictator you can easily blow it up, but much of the rest of the land's building are essentially invulnerable. For some reason I can make a huge satellite dish go boom, but a small pueblo won't do it too. Before anyone argues that is done because your character is a hero who wouldn't hurt innocents, I would like to point out early in the game it is stated that Rico can blow up whatever he wants as, "We'll rebuild it," and people hate the dictator so much folk don't care how many things gets ruined in an effort to destroy the enemy's statues, wind turbines, etc. I suppose it would be too heavy on the processing and technical side to have everything be possible to destroy, but a man can dream. 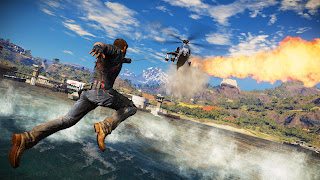 The earlier-mentioned grappling hook can do some cool tricks too. You can use it to hook two things together and then watch in delight what happens when you try to make the hooks pull on each other. Should you have any other ideas--wire a car to an exploding barrel, or two people to one another, maybe a huge fuel tank to a car that is about to drive away very quickly and cause some fireworks by doing so--it is all possible, and it is all so, so pretty when it blows up.

Shooting your guns is a fine game mechanic, it doesn't impress too much; it isn't awful either, though. The enemy AI is horrible though and even though this is an incredibly violent game it has a really cartoony-feel, like when Elmer Fudd shoot's Daffy's beak around his head with a shotgun--its really absurd and feels more silly than it does gruesome.

Conclusions
You should try, "Just Cause 3," if you enjoy fun and silly action games. It can get dull after awhile so try not to play it for sustained periods of time--that's my suggestion at least. Just give it a little bit of your time now and then in order to feel fully entertained.
Posted by David Charles Bitterbaum at 3:20 PM