Because Not All Stories Have to Be Never-Ending
Mini-Series are unique beasts. While there are ones that take place in an established comic-Universe and clearly tie-in with other stories, often a mini-series is its own tale with a clear beginning, middle, and end. Now, it could be argued what exactly constitutes a mini-series, but I would argue if it is solicited as a comic that is not ongoing and it is made clear you're looking at something that will be less than 12 issues, it fits the bill as a mini-series.

Therefore, comics that are solicited as being ongoing but which get cancelled, or a series where it is suddenly revealed it will be ending don't count. No, these puppies are clearly solicited as being an exact number of issues, and even if they grow or shrink an issue (or two), they still are basically self-contained joys. Taking that into account, two titles are easily my favorite mini-series of 2015. 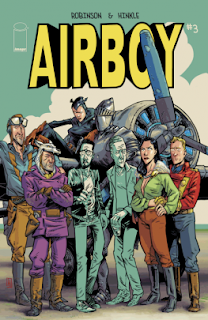 James Robinson and Greg Hinkle play exaggerated versions of their real-life selves who are hired to write and illustrate a reboot of the public domain character Airboy and find their world turned upside-down when he enters reality. Yeah, it sounds pretty silly but what makes this work is the mixture of the positivism of this comic hero from the 1940's with the very real and very angry thoughts of Robinson.

James Robinson may be making himself look a bit sillier and harsher than in real-life, but there has to be some truth to his character's discussion of feeling like people only know him as the person behind the, "Starman," comic and that folk think he can't do anything else. Watching this sorta-fictionalized version of James Robinson come to terms with the fact he is a depressed, miserable human being who needs to change carries with it a twinge of autobiography that makes the surreal elements encountered by he and the comic's illustrator, Hinkle, work all the better. 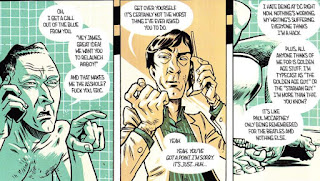 As is made evident at the end of this mini-series, perhaps the key to happiness isn't to be as nihilistic as Robinson or as idealistic as Airboy, but to find some kind of balance in-between the two and just work hard to have a good life. Thanks to its clever plot with fun meta-elements, and the creative way it injects the real-life Robinson and Hinkle into the story, "Airboy," is without a doubt one of the best mini-series this year. 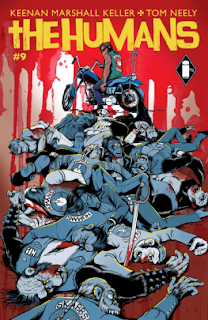 Written by Keenan Marshall Keller and illustrated by Tom Neely, "The Humans" is  a comic set in the late 1970's where humanoid apes exist and basically live the lives we did back then--with this mini-series focusing on a biker gang (know, obviously, as The Humans). This ain't, "Planet of the Apes," however, or a sci-fi tale. Putting the ape-angle aside this is one the the grittiest, roughest, and most violent and raunchy comics this year. It also shockingly can be really subtle and smart too, full of political commentary.


In the form of the character Johnny, a Vietnam-Vet who witnessed unspeakable things, the comic's creators have given us a character who longs to return to the feeling of joy and brotherhood he had with his fellow bikers, only to find he left a piece of himself he can never get back overseas. He also finds that you really can't ever make things return to how they were--life always changes. I make this sound like a deeply sad comic, but despite this very somber topic, there is still plenty of awesome jokes, exciting fights, raunchy sex, and general wildness you would expect from a biker gang in the late 1970's. 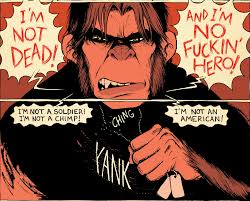 Marshall and Neely give readers just the right mixture of, "Lowbrow," sex and gore combined with literary ruminations on what makes us human and the measure of good and evil. After all, The Humans aren't really good guys, they just maybe are the least bad of everyone, and the comic makes sure to point that out, often asking the reader, "Do you really think you should be cheering for these people? Do you like seeing this madness?" This expert blend of tone, masterful plotting, and gorgeous artwork all result in a mini-series that as of wrapping-up this month (with future minis hopefully coming soon) is easily one of my favorite mini-series of the year.
Posted by David Charles Bitterbaum at 11:11 AM