What is Double Take and What are their Ultimate Night of the Living Dead Comics About? 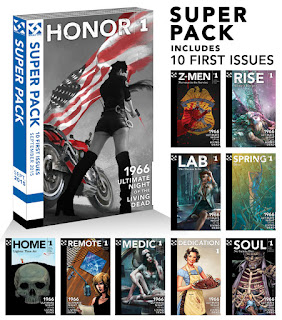 Many people who follow comics have heard of Bill Jemas. The controversial former EIC of Marvel, Jemas had a hand in some unique and amazing things coming about and some truly awful stuff too (just think of "Marville"). Jemas disappeared for awhile and worked on translating the bible as well as other endevors. Then he joined Take Two, better known for their video-games and it came about they were working on something comic-related.

It turned out these comics were to be set in the public-domain Universe of, "Night of the Living Dead," yet were to also have no one from the film associated with the endeavor. That results in this already having an air of fan-fiction about it, as instead of an original idea we have a scene I can imagine going as such...

Executive 1: We make video-games and want to get into comics, what do we do?

Executive 2: Well, Zombies are popular, how about that?

Executive 1: That's genius! I don't want us wasting time coming up with a new idea that could fail, but I also don't want pay for the license to anything.

Executive 2: Well, its kind of a fluke but the original, "Night of the Living Dead," is actually in the Public Domain. As long as we were to only draw from that particular movie we could set our story there.

Executive 1: You're on fire today! Shared-universes are a hot new thing too, and if we want to make this into action-figures, television shows, movies, and obviously games we ought to make a bunch of these. Let's do that and get someone with a bit of a, "Name," in the comic's industry to be involved and make this look better than a cheap attempt to make a quick buck.

Executive 2: No one would take my calls except for Bill Jemas.

Executive 1: Hire him, and then get ready for your promotion!
So here we are now, with these books that link to the first movie as everything else is protected by copyright. In order to make it more of an, "Event," all 10 first issues were released rogether a bit over a week ago. Available for separate purchase or as a part of a, "Genesis," pack, I have found it an interesting turn of events in that I actually haven't seen much in the way of reviews of the titles. I've seen a book here or there discussed, but I figured it would make sense to give each book a bit of a review, as if these turned out to be great people should know, and if they are terrible folk should be forewarned.

So, How Are the Comics?
Well, it turns out the comics are actually overwhelmingly mediocre, with some a bit better and others much worse, but in general these are below-average in terms of any enjoyment. I now present my thoughts on each of the 10 comics and then some overall opinions. Now, in alphabetical order:

Dedication #1
This is one of the comics that appears to be going for a horror-comedy vibe but instead just has jokes that fall horribly flat. As the ghouls (they are never called zombies) break into a grocery store the staff reacts at how they eat various objects in a silly fashion. This issue also starts the trend of us seeing a single character give a bizarre and random monologue to another individual (or a small group) where they tell us something about their past that seems to not really relate at all to what is going on. Oh, and the art in this one is pretty bland with the ghouls looking no different from regular characters, really.
2 out of 5 stars.

Home #1
This was probably the worst of all the books. It has a little girl character who seems to have everything she say be an insult or swear, but none of the other characters notice at all. It's kind of like how a variety of characters seem to not understand the threats made by Stewie on, "Family Guy," but unlike that show, nothing the girl says is particularly funny or makes her seem endearing. She just reads like a really mean kid and the so-called, "Joke," of how she's saying terrible things yet nobody understands wears out its welcome quickly. Assuming they keep this going in the future issues I can only picture this comic getting worse.
1 out of 5 stars. 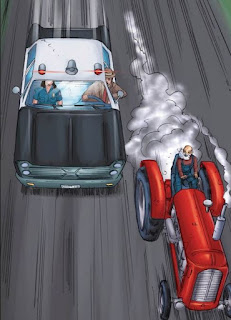 Honor #1
Another comic with a character telling a rambling story, the police pulling a man over for speeding, an old guy running his tractor too fast and dying...and that's it. The art in this issue is abominable too and the only thing this comic really has going for it is the old joke about how a 68 is when, "I owe you one."
1.5 out of 5 stars.

Medic #1
This issue has the same, "Attempted horror-comedy," vibe but again struggles at it, and throws in a weird monologue by a doctor operating on a patient where he describes when he tried to get lucky with a girl but failed at it. I suppose that plot-point makes a little more sense here to have a kind of, "Death and sex," motif, but it still just seems to be a weirdly pointless monologue (and there are still more to discuss with us only half-way through these comics). The art is bearable here and one joke at least made me laugh with a man who wouldn't quit whining about his toe whilst other people are dying, so this is at least so-so in quality.
2 out of 5 stars.

Remote #1
Focusing on the radio station in town this is again an attempt at horror-comedy that fails miserably. The art here is pretty bad too and the only thing I recall is that we see a competent lady at the radio station alerting the town to the danger it faces while her boss chills by the pool with a bunch of women miles away. Dull, dull, dull.
1.5 out of 5 stars. 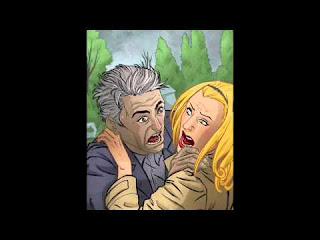 Rise #1
This one takes a big plot element from the start of, "Night of the Living Dead," and changes it. Barbara is of course a  main character in the original movie and her brother, Johnny, dies at the start. This issue asks, "What if Johnny didn't die, however?" and has him wake back up and rescue Barbara from near the end of the original move whilst they escape into the forest. There is a lot of silence in this issue except for when it also looks over to Washington D.C. with the scenes from the flick where it is discussed how the Venus Probe gave off radiation (a plot element attributed to causing the ghouls in many people's opinion, but also something I read the director of the original movie, George A. Romero, regretted putting in there as he preferred to have it be a mystery how the dead began to walk). As I was reading the issues in alphabetical order I found this one to be the first that was at least purely average in its mixture of plot, intrigue, and the like.
2.5 out of 5 stars.

Slab #1
Were it not for the incredibly twisted-seeming doctor in this issue who briefs people on the danger of the zombies (and has done a few experiments on the living cadavers too) this would be yet another dull first issue of the Double Take books. Thanks to him this issue actually reads with a darkly humorous tone that compliments the feelings of horror and results in another issue that thankfully isn't awful, if still lacking in too much enjoyment
2.5 out of 5 stars. 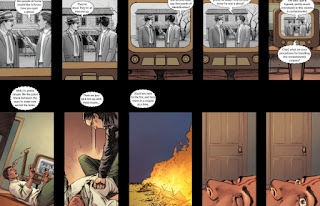 Soul #1
Similar to, "Rise," in that this comic more directly ties-in with the film, "Soul" features Ben surviving getting shot-at in the conclusion of the movie and we witness him trying to get his bearings. It riffs on some ideas about how the media would portray the zombie outbreak as well as touches briefly on the politics of what happens, but otherwise mostly is present to help recap some of the events of the movie. The art is actually decent in this issue too even if there is minimal plot. Perhaps one big element is that I already like Ben greatly as a character because I saw him in the movies and that makes him automatically more easy to relate to than other characters.
2 .5 out of 5 stars.

Spring #1
The shifting first-person viewpoints in this issue starts out as an idea that seems kind of fun, but then just gets confusing. It makes for an issue that is hard to follow and seems to basically be nothing more than a bunch of foreshadowing as folk down at the lake start disappearing--probably to later reemerge at zombies. It's a wholly unimpressive example of more pointless monologues, weak art, and otherwise being a bad comic.
1.5 out of 5 stars.

Z-Men #1
This issue shows how the U.S. Government reacted to the zombie outbreak, namely taking agents who weren't the best but competent enough to be sent out in the field. I suppose the idea here is to show how the United States grossly underestimated the ghouls and that led to the inevitable end of society that futures issues may show. This issue thankfully doesn't have any endless monologues and the art is passable, so unlike some of the other titles this was at least bearable.
2 out of 5 stars.

Overall Conclusions
The issues that I enjoyed the most were the ones that either directly related to the movie ("Rise" and "Soul") or were able to get the horror-comedy premise to work ("Slab"). I still found it all to be pretty bland and otherwise unimpressive. I can honestly state that I do not have the desire to purchase any second issues, and that is kind of sad to say that this new publisher batted a 0 out of 10 with me. While I wish Double Take and their Ultimate Night of the Living Dead the best, I won't be purchasing their wares anytime in the immediate future.
Posted by David Charles Bitterbaum at 7:24 PM