What Is This Day You Speak Of? 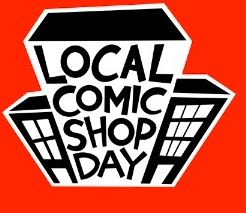 First off, Local Comic Shop Day, or LCSD, is not to be confused with Free Comic Book Day, or FCBD. I've heard of that happening and the occurrence of folk showing up to stores expecting free comics and then being disappointed probably very well happened. No, you see, LCSD is organized by the people from a comic-retailer group known as ComicsPro (think of it as being kind of like a union for comic stores, with all the love and hate unions get coming with that). Also, this was the first year it occurred, so that's neat too.

Local Comic Shop Day exists as a kind of riff on Record Store Day, it seems. The idea was stores could pay 50 dollars to ComicsPro for the right to take part (ten smackers if they were a member of the organization), and then could buy a certain number of cool limited edition hardcovers, variant-cover comics, and so forth to sell and promote their store with and get some profit. Then, of course people come in to buy the limited items and in theory other stuff too--kind of like Free Comic Book Day but instead of free comics you instead have a variety of rare neat stuff to browse and buy. This is undoubtedly a fun idea, and something I like as even if I am not too big on variant covers I would happily buy one that looked cool far a comic I haven't read yet, or a snazzy hardcover for a book I want to check out.
That's the main thrust behind the day too, you get folk coming to the store who want to check out the limited-availability wares, and your shop can promote it a bit or a lot--whatever degree it desires. From what I've said you probably already see some ways this works well and is interesting for the right reasons...as well as where one thing in particular can go a bit wrong and be interesting for what is arguably the wrong reason.

The Right Reasons
It supports a group of comic retailers who despite occasional criticism do really seem to help lend a voice to retailers.
There are mixed opinions on ComicsPro, but from what I've seen they do a nice deal of good as opposed to much of any bad so I like that. If giving them 50 dollars to help support the organization allows you to acquire some cool comic stuff your store can then sell and also make a nice profit on is the deal, I can get behind that.

Cool and special stuff!
We all like that feeling of getting something exclusive or special. Unique comics can look cool, give us that warm and fuzzy feeling, and the fact that someone can get something, "Rare," may result in them buying it, reading it, loving it, and then continuing to buy future issues that aren't even hard-to-find, just fun.

Store promotion and profit.
A comic store can have a special sale with LCSD and promote it a bunch, or just simply put out the wares and get a bit of a profit when the items sell--and they will almost assuredly all sell within the day they are available as they're limited-edition rare stuff that the crowd hankers for, as discussed in the above point. It helps stores draw a bit more of a profit.

The Wrong Reason
Speculators AKA this is why we can't have nice things.
Imagine, you want to go and get one of these cool special comics or hardcovers. You stop by your shop maybe an hour or two after its opened and one guy apparently came by when the store opened to buy everything and sell it online. You're probably mad and also were unaware that Local Comic Shop Day basically turned into a huge speculation-fest for some comic-fans, as the general rarity of comics with stuff like copies of the 1st issue of "All-New Wolverine" with a 1-in-500 cover brought out the comic-flippers in droves. Just check, "Local Comic Shop Day," on eBay and you can see there's some crazy stuff going on with comics that cost $2.99 or $3.99 suddenly being sold for at least twenty smackers and the rarer variant covers or hardcovers going for a Benjamin (one hundred dollars for my non-U.S. readers) or two.

One of the many comic-sites I read, Comics Heating Up, talks a lot about comic speculation and considering its own readers often buy comics to then sell, it is interesting how even they express some disgust in the comments-section of this post about LCSD when it comes to how some people were just snatching up as much stuff as they could to then attempt and flip for a profit. Some stores maybe took it too far in their effort to prevent speculation by making people buy a certain amount of other stuff before being allowed to by anything related to LCSD, or limiting people to barely anything, but clearly speculation for LCSD ran a bit rampant, and I find it a bit unfair stores were able to derive a small profit from buying and selling the books while Mr. Speculator-Jerk can swing by, buy it all up, and then try and sell everything at 5X the price. 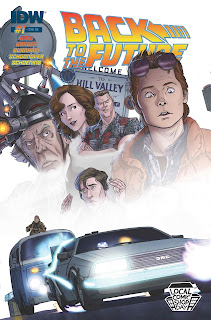 Even if rampant speculation can throw a wrench in things, I still like the idea behind Local Comic Shop Day and was excited to stop by my store on Saturday to pick-up some cool stuff I had saved-up for/was careful to not spend all of on Black Friday. I would hope its inaugural year is judged to be enough of a success by ComicsPro and the retailers who took part that it continues to occur.
Posted by David Charles Bitterbaum at 9:48 PM